While Mo Willems hasn’t been awarded the Caldecott Medal for his children’s picture books, he has been nominated a number of times. Do multiple Honors equal a Medal? I doubt he’d think so. Nevertheless, I think his simple illustrations are award-worthy and therefore worthy of my review.

Here’s a rundown of some of Willems’ books, along with my thoughts on his brilliant illustrations. 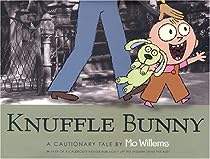 In the first, Trixie, her Knuffle Bunny, and her father go to the Laundromat. But on the way home, Trixie is very unhappy! Something is missing! But Trixie can’t yet speak, so she is quite frustrated. Will she ever get her Knuffle Bunny back? It has a simple rhythm to it (“down the block, through the park, past the school”) that repeats and I think provides for a very pleasant book to read.

In the second book, preschooler Trixie takes Knuffle Bunny to school for show and tell, only to find that Knuffle Bunny isn’t so unique, and there’s a little mix up. This book was also cute, but lacked the rhythm I so enjoyed in the first one.

Both books were awarded the Caldecott Honor for excellent illustration, and rightly so. Each book features black and white photography of familiar places (an apartment building, a street corner, a Laundromat, a schoolroom, etc.) with colorful illustrations of Trixie and her family and friends on top of them. I highly enjoyed the style. 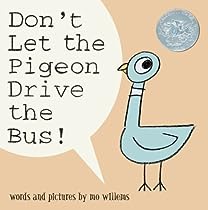 In Don’t Let the Pigeon Drive the Bus!, the pigeon begs the readers to let him drive the bus – but we know better than to let him! The illustrations are incredibly simple crayon drawings, which adds to the simple charm of the book. (My husband says, “That does not look like a pigeon!” I, however, don’t care: the pigeon is very cute all the same.)

The pigeon essentially has a temper tantrum as he begs for a turn to drive the bus. Since I don’t like listening to whining, I have a hard time enjoying this book, as delightful as the illustrations are. But, while it’s not my favorite book to read, I’m sure young children enjoy telling the pigeon “NO!”

My son is still a bit too young for this book, but I do wonder whether I’ll read it to him when he is older. Parents, does reading a book about a pigeon having a temper tantrum encourage a young child to copy such whining? What are your thoughts about this book? 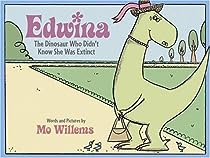 Edwina, The Dinosaur That Didn’t Know She Was Extinct is about friendship. Reginald von Hoobie-Doobie is the local “spoil sport” who knows dinosaurs are extinct; everyone else is best friends with Edwina, a dinosaur. When he tries to tell everyone the truth (that dinosaurs are extinct), only Edwina will listen to him. In the end, Reginald decides he doesn’t care: he’s glad he has a friend. It’s a cheesy story, but amusing all the same. The cartoon-like illustrations are highly appropriate for the cartoon-like story.

Leonardo the Terrible Monster is another humorous look at what it means to be a friend. Leonardo isn’t ugly; he isn’t scary; he isn’t really any good about being a monster. But then he realizes it’s more fun to be a friend. The illustrations are again very simple, which had a good effect on the story itself.

My favorite of these books was Knuffle Bunny. I love the rhythm, the photography and illustration, and the story. I highly recommend it!

Mo Willems has written a number of other wonderfully illustrated children’s books. Visit his website and his blog.