Last month I read Carl Sandburg’s poetry so I’d have something “local” to submit to the Bookworms Carnival: Local Authors. I realized as I read his poetry that I know very little about my own home town. I spent some time learning about Chicago history this month, and it’s been fun. I’m also working on some reading lists so I can keep learning. Let me know your favorite Chicago-centered books, fiction and nonfiction.

I found that many of the books I got were quite dry histories, and I didn’t have much patience with them. I read some and mostly I looked at the pictures of some. My history lesson came from videos. Here are two of the books I’ve read and one of the videos that I’ve enjoyed lately. 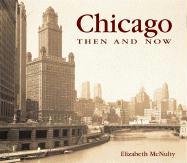 Chicago: Then and Now by Elizabeth McNulty was the first book that I picked up. It’s a coffee table book, and it compares street corners and neighborhoods over the years. It provided a short paragraph about the scene, and had the “then” picture on the left-hand page and a “now” picture on the right-hand page. I am not very familiar with Chicago today, let alone in the past, so it probably wasn’t the best starting point, but it was still interesting. I was interested enough to keep searching for more information. 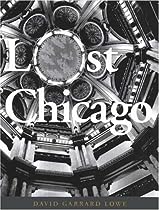 Lost Chicago by David Lowe focuses on the buildings that have been torn down. Since I’ve never lived in the city, it’s not as tragic to me, and I got rather tired of the drama (this building has “disappeared” and this “gem” has been horrifically removed). Beyond that, though, the book provided a very general history of Chicago in between the photographs, starting with Louis and Clark and going through the Chicago fire and to the early 20th century. Because the focus was on the photographs of the now-torn down buildings, the history was not too dense for me. I learned about a little about the Chicago School of Architecture and I’m eager to learn more. I also found myself interested in some more of the history.

I mentioned the video Chicago: City of the Century in my Reading Journal post last week. It was excellently done, and I thought watching a three-disc documentary was a wonderful way to grasp some of the history of Chicago without having to read a 700-page book. It was slightly cheesy in its drama, but overall, this movie was a great beginning. I know it was not too cheesy because I also started a different one that was so horribly done I couldn’t watch more than 30 minutes. I won’t bother pointing you to that one.

As I’ve read and learned about Chicago, I’ve found a lot of different things to add to my “to read” lists. If you’ve read any of these, please let me know what you thought.  What Chicago books come to your mind? It seems Chicago isn’t often a memorable setting for novels, as London and New York are.

I really wanted to end with a little Frank Sinatra singing about That Toddlin’ Town. But I can’t find the real man on YouTube. Here’s a cover band.

And if you’d rather, here’s the Obama version.