You are here: Home / Non-Reviews / Writing about Reading / Essays/Articles on Reading / Ingenuity and Authority: Who Really Wrote Aesop’s Fables?

A few months ago, I read a version of Aesop’s Fables that I found online at Project Gutenberg, written and published in the early 1900s. I thought I’d read Aesop’s Fables.

I was interested, then, to read in chapter two (“Ingenuity and Authority”) of Seth Lerer’s Children’s Literature: A Reader’s History from Aesop to Harry Potter that Aesop’s fables differ markedly from generation and generation. The history of Aesop’s fables (the Aesopica), then, illustrates how the translators changed the message of a translated text, especially in literature for children. This prompted a question: How are the authors’ purposes and translators’ objectives subversively included in modern children’s literature, and does it matter?

Fables, Lerer explains, were (and are) the child’s first “lesson in the arts of the literary imagination” (page 37).

[Fables] take parts for wholes, draw on particulars for generalizations, make mute creatures speak. Their status in the nursery or in the classroom rests not simply on moral or didactic goals, but on their metaphorical enchantment. … the heart of the Aesopic fable is a form of impersonation: of animating the inanimate, of turning abstractions into realities. (page 37, page 38)

Even the most original of the Aesopica had some didactic goals. Lerer explains that “Aesop became a touchstone for an understanding of life itself” (page 38), and Aristophanes, Plato, and other writers often referred to Aesop in their texts as underlying examples of a basic nursery education. Hearing Aesop, then, appears comparable to a modern child learning to sing the ABCs. It was an understood part of growing up. 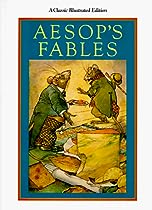 Through the centuries, various translations of the Aesopica were made, each drawing on the vernacular language of the age. Following the advent of Christianity, translations of Aesop began to emphasize different aspects: instead of being moral life tales, they became Christian parables with religious undertones. Further, Aesopic texts for children in medieval schools included commentaries to explain correct behavior.

Some of the Aesopica still retained a sense of literacy, and some later translators maintained a sense of “wit” rather than “the heavy hand of the school teacher” (page 46). But the bottom line is this: “Translation is transmission” (page 47). With the advent of the printing press, Aesop was often the first text printed, and the translator could rewrite it as he or she desired.

Do We Need Aesop Today?

Obviously, with the advent of a further children’s literature, children can look anywhere for “metaphorical enchantment.” But when reading Aesop a few months ago, I was surprised to recognize familiar stories and semi-familiar characters.

Lerer also recollects how the Aesopica has been reincorporated into other literature: Hamlet’s conversation with the skull, Yorick, for example, has shadows of Aesop (“scattered fragments of an old tradition,” says Lerer, page 56). Aesop speaks today through such fragments, and the new metaphors are the ones familiar to this generation. You probably have read remnants of the Aesopica without ever picking up a book labeled “Aesop’s Fables.”

Further, I was struck by the brief history Lerer recounted. The translator’s and publisher’s agendas transformed the fables into a new literature, thus calling in to question the authenticity of the “original” fable itself. Each new translation became its own work of literature, designed to meet the needs of the children of that age, as the “translator” deemed appropriate.

For me, this calls to mind, then, the various recent debates about works for children today that are obviously created with an agenda. As I haven’t read some of those debated books, I can’t give an opinion of those. I don’t have answers, only questions, and I think it leads to an interesting discussion.

Looking back on the history of Aesop, I wonder: Does it matter why a work was created for children? What is the value of didactic or even subtle “agenda” literature? Did children in the medieval ages know, care, or notice why and how the Aesop they read was created? Would we, as parents, resent the agenda of the translator, and if so, how can we pay attention to the agenda of the author today?

For the rest of October, I’ll donate 10 cents to World Food Programme for every (non-spam) comment I receive on any post of Rebecca Reads. See most post on Blog Action Day 2008 here. I’m also donating any proceeds (4%) from my Amazon Store.