Raisin and I enjoyed learning about Australia for our school time this month. Since he was born there, I have a special place in my heart for the country, even though we really only saw a smidgen of the country: a few scenic places within five hours of where we lived in Melbourne. We began our study of Australia by coloring a map with the geographic features (mountains and land with vegetation as opposed to the desert). Then I copied Small World at Home’s idea and we made a giant cookie in the shape of Australia. We added frosting and green sprinkles for the coastal/forested lands, chocolate chips for the mountains, and gel for the major cities. Then we cut it up into the various states and ate it! Raisin loved this project. He was excited to tell his friend, “Guess what? We ate Queensland this afternoon!” He thought it was so funny. Given his age, I’m not surprised that he’s forgotten the names of the states and cities. But weeks after the fact, he still can find the city he was born in (Melbourne) and he remembers about Uluru, which we talked about briefly.

One picture book we enjoyed helped us appreciate the size of the country and the various scenery. Are we There Yet? by Alison Lester was a child’s perspective of a month-long road trip around Australia. Raisin enjoyed learning about the various landmarks and began to understand the vast scope of the country since the road trip lasted so long for their family. He liked following their progress on the map. It was also fun to show him our family picture in the Victorian mountains (he was two months old) and a picture of him with me by The Twelve Apostles when he was about six months old. (We compared our picture  to the illustration of the family by the Twelve Apostles that was in the book!).

We also spent about a week learning about the Great Barrier Reef. We watched a National Geographic video about it (it was geared towards adults, so I sat with him and we talked through the entire movie, and even then he barely made it through it.). We watched Finding Nemo, of course, and make a food chain chart using images from that movie to talk about which animals were predators to whom. We made another board game, The Finding Nemo Game, which rehashed some of the facts about reef creatures, but we didn’t play it nearly as much as we played our Earth Game so Raisin has forgotten a lot of what we discussed. In general, though, he remembers the Great Barrier Reef is a cool thing off the coast of Australia, and he knows what a “predator” is, so I consider that success for us!

Raisin did not show immense interest in learning much about Australia: neither the people (I loved the Dreamtime stories, but I could not get him interested), the history, nor the landmarks interested him. Our unit study ended up being mostly about the animals of Australia, which was fun too. Koala Lou by Mem Fox told of a koala who wanted to impress her mother, so she entered a gumtree climbing contest. I loved the illustrations, which featured all the various animals of the Australian outback. Wombat Stew by Marcia Vaughan was a silly tale of various animals getting the dingo to add icky things to his soup in order to trick him in to not eating the wombat. Although Raisin insisted he didn’t like this story, I caught him singing the Wombat Stew song after we read this book!  Snap! by Marcia Vaughan told the story of some young Australian animals playing nearby the crocodile. They use their wisdom to avoid being eaten. And finally, the ridiculous My Grandma Lived in Gooligulch by Graeme Base is about a woman who adopts the animals of the bush. Told in poetry, the book gets more and more amusing as grandma’s pet animals fill the pages.

I also tried to give my son a very basic introduction to Aborigines and culture, but, as I said, it didn’t go over so well. He did like Big Rain Coming by Katrina Germein, which had Aborigine style artwork. I liked the subtle way the book introduced the young reader to the Aboriginal sensitivity to the land. Together, Raisin and I looked at the boomerangs we purchased when we lived in Australia and we talked about how the art of dots and lines created symbols. He didn’t want to try his own hand at art (he’s just not into crafts most of the time). 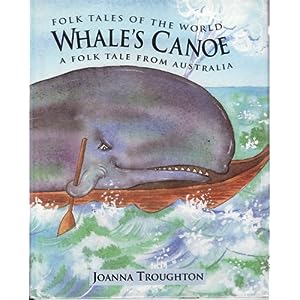 We did read a very silly folktale called Whale’s Canoe which is supposedly based on a Dreamtime tradition. Joanna Troughton‘s retelling was perfect for Raisin’s age (4).

Whew! It was fun to focus on Australia for two months. It’s hard to believe that I was moving there five years ago. It feels like yesterday at the same time that it feels like a lifetime ago.

We also found a few other wonderful picture books in the past few weeks, but I’ll have to save those for another day!

What great picture books have you read about Australia?