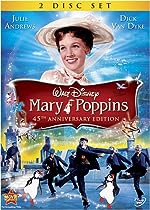 For me, that movie was Mary Poppins.

In 2007, I read A.A. Milne’s Winnie-the-Pooh and loved it along with the movie; they both have their merits. 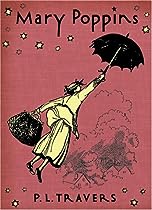 So this year, I thought that I might also come to love the original character of Mary Poppins, originally created by P.L. Travers in the novel Mary Poppins in 1933.

I was horribly disappointed.

Traver’s Mary Poppins was far from the lovingly-stern nanny Disney created. She seemed, basically, mean and unfeeling. The adventures she had with the children were odd, but they lacked the sense of fun that the movie created for me. Because my first exposure was the movie, this review will compare the book and the movie throughout. There are spoilers.

While the book had four Banks children (twins John and Barbara are the youngest), the two youngest were not a part of the adventures. In fact, even the two oldest children missed some adventures. The adventure in the pavement picture? That was Mary Poppins and Bert on Mary’s day off. That also was the only mention of Bert in the book; he didn’t figure in to the other adventures.

There were some favorite stories that were missing. There was no “tiding up the nursery”; there was no dancing on the rooftops. There was no winning the horse race and singing Supercalifragilisticexpialidocious (Ha! That’s actually in my spell checker!). Maybe those were in the sequels, but they weren’t in this novel.

But my main problem with the novel Mary Poppins is that Mary is mean and cranky. She does not seem to care about the children at all. Take this quote:

All day long Mary Poppins had been in a hurry, and when she was in a hurry she was always cross. Everything Jane did was bad, everything Michael did was worse. She even snapped at the twins. (page 149)

That is not the Mary Poppins I love from the movie. Mary Poppins in the movie says “Will you hurry up?!” but not in a seriously mean way.

The meanest thing Mary Poppins did in both the book and the movie was leave. But it was infinitely worse in the book. In the movie, she told them she was leaving when the wind changed; Jane and Michael cried as she packed. Then, the children rushed off with their father, forgetting to say goodbye. Mary is sad, but knows it is how it should be.

In the book, the children know she is leaving when the wind changes. They worry, but then she says

Now I’m just going to take the shoes down… Behave yourselves, please, till I come back.

And then Mary Poppins leaves and never comes back (in this book).

I think, for a young child, that is the most horrible thing she could do. To leave not just without saying goodbye but without giving any indication that she’s actually going?! I absolutely hated it. I think children would worry that people they love might never come back when they leave.

It’s true that in the movie, Mary Poppins is rather distant and “cold.” She’s also quite vain and self-concerned. But we can all tell that she still loves the children. In the end, it’s the children who have run off without saying goodbye. They choose to move beyond the entertainment of Mary Poppins.

But that leads me to the last point. The movie had an underlying plot, while the book didn’t. In the movie, Mary Poppins comes to save the family relationship, to help the father learn to love his children and cherish them. In the book, the father is mostly absent. Mary Poppins appears to be entertainment for the children, and that is all. The novel lacked any cohesive point that made it feel like a worthwhile read.

Ironically, P.L. Travers was quite hesitant to team with Disney to make a movie in the first place. According to Wikipedia, she had lots of input into the script. I have to say, the script writers did a wonderful job and making the premise of a good story into a marvelous one. And Julie Andrews, as Mary Poppins, surely helped it along.

In the end, much to P.L. Travers’ disappointment, I’m sure, I found Mary Poppins the novel to be less than mediocre. It’s not often that a movie out-performs a book, but this is one of them. That said, after reading the novel, it was fun to watch the movie again: some of the characters in the novel become only minor characters in the movie.  There is a relation between the two, but I’ll stick with the movie in the long run. It is already a classic.

I don’t plan on reading the other Mary Poppins adventures – this one was far too disappointing. But I may revisit them in a few years if my son shows an interest in reading them.

What movie from your early childhood do you cherish?

For those of you who have read and watched Mary Poppins, do you like the novel version of the nanny? Which did you experience first: the book or the movie?

Read for the Dewey’s Books Challenge.

If you have reviewed Mary Poppins on your site, leave a link in the comments and I’ll add it here.