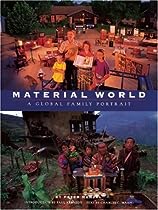 In a similar manner to What the World Eats (reviewed here), Material World by Peter Menzel attempts to illustrate the material wealth (or material poverty) of various families around the globe by photographing a family’s household belongings and illustrating the family’s daily life in photographs.

Using full-color photography, each country is highlighted first with a two-page photograph of an “average” family in the street (or a field) with their possessions and a listing of those basic possessions. Then, there is a summary of the country’s history and the family’s statistics, such as house size, family size, and income (which are average for the country). There is also an information bar with statistics relating to the country, such as fertility rate and country population. Text and photographs illustrate the daily life of the chosen families.

In some respects, Material World, which was published in 1994, 11 years before What the World Eats, is a much better book. The editor writes in the introduction that the families were selected based on UN averages for income, and the countries were based on various UN averages. (The introduction to What the World Eats, on the other hand, specified that countries were chosen based on where the photographer had to be in each particular month.) In that respect, Material World is a better representation of the world and is less offensively stereotypical. It certainly is interesting to compare a families’ material belongings from Uzbekistan to those of a family in Texas: the Uzbekistan family’s 29 quilts and rugs dominate the picture!

On the other hand, the editorial comments within Material World are highly subjective. The “history” in the Israel section, for example, does not even mention Palestinians; only “outraged Arabs in neighboring nations.” Another example of bias that stood out to me was in the Italian section where the photographer summarizes the situation of the family in rural Pienza:

…I’d rather have financial problems in a place like Pienza than be wealthy in a place where you have to drive an hour to show your kid a tree.

Material World was published by Sierra Club, so I guess I shouldn’t be surprised by the ecological concerns mentioned under most countries’ histories.

Further, Material World is also obviously dated for 2009 readers; the histories of the countries were incomplete and the pictures showed dated styles. What might have once looked “cutting-edge” now looks old.

In the end, then, Material World is an interesting “coffee-table” look at the way the world lives, but its limited scope and dated pictures only tell a heavily biased story.