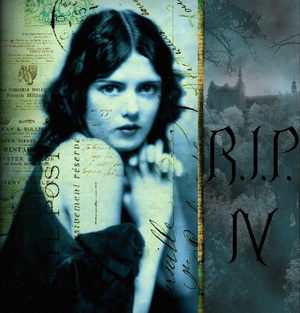 Before I begin, I should clarify a few things. I hate being scared, and I hate horror. And I don’t dislike: I mean hate. And I don’t really like Halloween because I don’t even like candy (I’ll take it if you give it to me … but I’m not going to go seeking it) or pumpkin carving.

But I’ve been so excited about Carl’s upcoming RIP challenge. Last year, I didn’t join because I was a pretty new blogger and, as I said above, I don’t like scary books. And yet, as I saw everyone’s reviews about gothic and mystery books, and I was sad I hadn’t jumped in to the challenge. I forced myself to reread Edgar Allan Poe (still didn’t like him a lot), and then I found myself enjoying Washington Irving and Nathaniel Hawthorne’s stories.

So since last year, I’ve been saving my

reads for October, because I thought it was a one-month challenge. Then I found out: The challenge starts now! YEAY!

Other books I’ve reviewed in the past year that relate to the themes are these: A Christmas Carol by Charles Dickens; An Enemy at Green Knowe by L.M. Boston (children’s fiction); The Book Thief by Markus Zusak; The Chimes by Charles Dickens; The Haunted Man and The Ghost’s Bargain, by Charles Dickens; Jane Eyre by Charlotte Bronte; Stiff: The Curious Lives of Human Cadavers by Mary Roach (nonfiction); Stories by Guy de Maupassant (I highly recommend his ghost-y stories; much better than Poe’s, I think); The Woman in White by Wilkie Collins; and The Lovely Bones by Alice Sebold, which I just reviewed this morning.

For this year, I’m signing up for Peril the First, to read four works. Here’s my pool of books, my pool of books to last a lifetime (because it will take me that long to get through all of them).

I’ve put them in order in each category of “most likely to read in the next weeks.” You’ll note my modern fiction section is a bit small; I just don’t know which is actually not scary.

Now, how do I limit the next two months to four of these?!