Narrative in the Life of Frederick Douglass + The Listeners

In his narrative of life in slavery and what led him to escape, Frederick Douglass captured the chief dilemmas that slaves dealt with, including slavery of the mind. Douglass’s slavery in Baltimore and surrounding areas was horrendous, and yet it was, as he admitted, quite tame compared to those experiences that slaves on plantations in the South dealt with.

As I read, I was struck that the main obstacle that Douglass had to overcome was not the freezing weather, the starvation, the humiliations, and the beatings, but rather a broken will. Of course, all of the former abuses directly contributed to the later, but it is his will that allowed him to be himself amidst the horrors of slavery.

Douglass was a strong-willed and intelligent boy as he grew in Baltimore. For example, he tricked the white boys his age to teach him how to read and he secretly worked on learning more. But as a teenager, he found himself reassigned to an overseer in the country who had a reputation for “breaking in” rebellious slaves. Eventually, Douglass’s spirit was broken too. That was the most heart breaking to me, for the slave masters determined to turn him into something less than human.

Douglass’s story about his broken spirit reminded me of the story of Sethe and the others in Beloved, one of my favorite novels. “You your own self,” Sethe is told. And that is what I kept thinking as Douglass told his story. He was his own self, and he was strong. He had to rediscover his will to be an individual after that master “broke” him, just as Sethe ultimately had to discover herself in Beloved. As is evidence by the existence of this narrative, Douglass eventually escaped slavery and was able to tell his story, further evidence that he was able to rediscover his will to be an individual.

Douglass’s story was written just ten years after his ultimate escape from slavery, when he was 27 or 28, and that also fascinates me. It was the 1840s, and slavery was a long way from being ended. As an escaped slave, evidence of his whereabouts could bring slave catchers, and many Northern states were required to return the slaves. Yet, he does not fear to name many names. It is clear that he has a confidence in himself. He later was able to earn enough money, lecturing in Europe, to legally buy his freedom. That is a story of success and self-confidence. 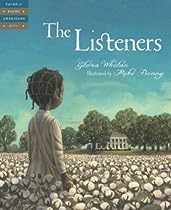 As I read this account of a slave in a border state, a slave with a difficult and tragic life and yet one that was not “that bad,” I was repeatedly reminded of a picture book I read a few weeks ago. I wrote up a blurb about it and had intended to post it with other picture books about the subject in a few more weeks. My original impression of The Listeners by Gloria Whelan, illustrated by Mike Benny, was as follows:

In a beautifully illustrated large book, we learn the story of three little slave children, whose job it is to listen near the plantation house every night and report back to their parents. It’s a slave story, but it has an element of hope to it. The illustrations are gorgeous. I’ve seen some comments suggesting that it is too light-hearted a look at slavery: truly this is not like the slavery I’ve read about before, and I can accept those comments. But it still is a touching and beautiful picture book, and I can see it as a good introduction to the subject for young children.

After reading Douglass’s book, I am now confused about what I think about The Listeners. I think it gives an incorrect view of slavery. I no longer have it to reread (I had to return it to the library), but I do remember a scene where the children are dancing with their parents. They delight in those evenings.

On the contrary, Frederick Douglass said:

I have often been utterly astonished, since I came to the north, to find persons who could speak of the singing, among slaves, as evidence of their contentment and happiness. It is impossible to conceive of a greater mistake. Slaves sing most when they are most unhappy. The songs of the slave represent the sorrows of his heart; and he is relieved by them, only as an aching heart is relieved by its tears. At least, such is my experience. I have often sung to drown my sorrow, but seldom to express my happiness. Crying for joy, and singing for joy, were alike uncommon to me while in the jaws of slavery. … (page 35, emphasis added)

Gloria Whelan, author of The Listeners, is a woman from Detroit, who has written a number of picture books set in rural Michigan, as well as other stories and picture books set in other locales, such as Russia and Japan (see Wikipedia; her author site). I guess I wonder what books she’s read about real life in slavery. Has she read any escaped slave journals and accounts, like this one? Maybe she has; I don’t know. But now I doubt the veracity and the appropriateness of a picture book with slave children laughing and dancing. It gives the wrong impression.

In Douglass’s account, as a child, he received one shirt a year and when it wore out, he went naked. He was always hungry. All the children ate out of a trough, and the quickest ended up eating the most. At night, he had a burlap sack as a blanket. In the rural Maryland winters, his feet would frost over in the night. He was forced to watch women being whipped, and saw a man shot for being slow to respond to the master’s orders.

How does one teach this cruel reality of slavery to children, or do we just gloss over it with pretty picture books until they are older?

Do you think it’s appropriate to emphasize, in a picture book, imagined happy moments that some slave children may have had?

I don’t have any answers. As I said above, I’m conflicted.