Pat the Bunny and Other Interactive Books for Kids 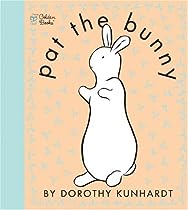 When I handed Pat the Bunny by Dorothy Kunhardt to my son after I read it to him in the library, he got a really big kid smile on his face and he held it close to him. It’s a small book, just right for little hands. But the pleasure comes from the interaction: my son can pet the fuzzy bunny, he can lift a cloth to play peek-a-boo with the main character, and he can scratch Daddy’s face. According to Wikipedia, Pat the Bunny is the number 6 all-time best-seller for children’s books, even 50 years after first publication. I’m not surprised, because the textures and the activities make this a book perfect for little kids.

My son loves his “touch-and-feel” books that we have. We have three “Little Scholastic” books: Numbers, Alphabet, and Shapes. These books all have pages with fussy, rough, smooth, or otherwise, texture-filled pages. They usually only keep his attention for about five minutes at a time, but that’s still something, especially in the middle of church when I’m hoping he’ll stay quiet.

We’ve also read Where’s Spot? by Eric Hill. It doesn’t provide textures, but the pop-up interaction made reading fun as we searched for the hiding dog.

When I read Golden Legacy a few weeks ago, I was struck by how books like Pat the Bunny redefined children’s literature in the last century. In 1940, the author had a hard time finding a publisher willing to invest in a book with sandpaper and cottony textures. Now, I can’t imagine my toddler son’s library being complete without books like that!

Apparently, even John Locke’s ideas of the early 1700s were urging such books for children.

John Locke was a philosopher and educator born in the 1600s. Apparently, we have him to thank for the plethora of children’s literature these days. According to chapter five of Seth Lerer’s Children’s Literature, John Locke was one of the influential philosophers urging a literature for children.

For the first time, “the Lockean narrative revealed the children responding to, absorbing, or reacting against things and actions” (Lerer, page 105). I found it helpful to compare Locke’s concepts to Pilgrim’s Progress, as Lerer does. In Pilgrim’s Progress (which I reviewed in January), the characters only speak rather didactic lectures. The “Lockean” books, on the other hand, were light-hearted stories. And sometimes, that was it.

In summarizing Locke’s Some Thoughts on Education and its influence on children’s literature, Lerer says:

Playthings could also be used to teach the child to read. Letters could be pasted onto dice and polygons; words could become toys; books themselves could become objects of delight. … So influential was Locke’s advocacy of such toys that John Newbery, in the 1740s, offered balls, pincushion, counting stones, and polygons for sale along with his books.  … The book becomes one more item in the furnished room of childhood. (page 106-107, emphasis added)

I think it’s good to know where things got a start – and it certainly is interesting to see where children’s literature has come since the didactic days of Pilgrim’s Progress. What would we do without touch-and-feel books for kids?

What are your favorite interactive books for young children? I’ve only mentioned a few here, but there are almost an infinite number of them today!

An Update to My Children’s Literature Project

I’ve been working my way through Seth Lerer’s book Children’s Literature: A Reader’s History from Aesop to Harry Potter, and I stagnated in January, mostly because I was packing, moving, and unpacking. I’ve read halfway through the book, and I’m going to get back into a habit of posting more regularly about the chapters. While I’m sure I could sit down and finish reading it now, I’m going slowly because I am also reading some of the “children’s” classics Lerer discusses, such as Pilgrim’s Progress, which I finished in January. I’m currently reading Robinson Crusoe, and then I plan to read Gulliver’s Travel’s and Swiss Family Robinson. Also, while it’s a few chapters away yet in terms of the project, I’m going to begin working my way through Hans Christian Andersen’s fairy tales; I really enjoyed reading Grimm (although it was rather grim and bloody), so I’d like more fairy tales (just in time for the Once Upon a Time Challenge).