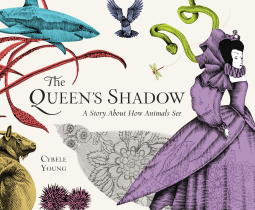 The Queen’s Shadow by Cybele Young (Kids Can Press, March 2015) is a most unusual picture book for older readers about how animals see. It is difficult to identify as a fiction or a nonfiction, simply because it has elements of both!

In The Queen’s Shadow, a motley gathering of animal friends have gathered at the queen’s home for a party. After a lightning flash, the queen has found that her shadow is missing! Using clues about how the various animals at the party see, the detective is able to eliminate the animals that certainly could not have seen what has happened.

I loved how this nonfiction report of how animals see became a “who dun it?” mystery for the sake of being fun! The animals include the mantis shrimp, the chameleon, a shark, a giant squid, a goat, and so many more! The story is told in the middle of the pages, and the facts about the animal’s eye sight appear in clearly differentiated side bars. I really enjoyed learning about such a variety of animals, and I was pleased when each one was able to prove his or her innocence!

In addition to the intriguing story line and fascinating facts, I enjoyed the art style. The graphics are rendered in pen and ink. It perfectly matched the mood of the book.