Pablo Neruda’s early poetry (specifically, Twenty Love Poems and a Song of Despair) does not have much to do with Sandra Cisneros’ The House on Mango Street. Neruda was a Chilean who wrote love poetry (in Spanish) in the early 1900s at the age of 20. Hispanic-American Sandra Cisneros wrote in the 1980s a short volume (in English) of connected short stories about a Hispanic girl in Chicago. But I read both these works in Spanish (the Cisneros in translation) this month, and so the tenuous relationship between them is the language I read them in.

I studied Spanish for a few years while in college and I spent ten weeks in Bolivia one summer, so at one point I knew the language fairly well. I bought La casa en Mango Street back in the days when I dreamed in Spanish; reading it was delightfully easy because I knew the vocabulary. But, needless to say, when you don’t use a language skill for five years, you start to forget things. I recently met a woman at church who speaks Spanish and little English, and I found myself laughing and delighting in our broken conversation as I struggled to find Spanish phrases and she struggled to find English ones. It inspired me to rethink my relationship with this foreign language I once knew.

I was delighted to see that Neruda’s slim volume of poems had the Spanish alongside the translation. And while I no longer was able to read La casa en Mango Street with ease in Spanish, I was able to pick up a volume of the English and compare the two. I read Mango Street in Spanish, then in English, and then bits of it again in Spanish.

Twenty Love Poems and a Song of Despair by Pablo Neruda 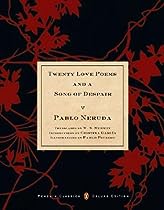 There is no doubt in my mind that the second volume of poetry that Pablo Neruda wrote is an example of his Nobel Prize in Literature greatness. Oh my, but his Twenty Love Poems and a Song of Despair are absolutely incredible to me, especially after I learned that he was twenty-years-old when he wrote them.

The beautiful introduction says, “These are not abstract poems aimed at idealizing beauty or love, but the messy, scented perceptions of lived loves – and lusts.” (Cristina Gracía, introduction, page vii)

That description – messy, scented perceptions – is why I enjoyed this volume. Although it the emotions and perceptions were “messy,” as whole it was perfectly controlled and beautiful.

What struck me is that this volume of poetry is telling a story. The love poems have elements of sadness (the woman is always sad) and the last poem of love is essentially a “good-bye”:

Because through nights like this one I held her in my arms
my soul is not satisfied that it has lost her.

Though this be the last pain that she makes me suffer
and these the last verses that I write for her.

Immediately following that is the “Song of Despair.”

I think my favorite poem was poem 1, “Cuerpo de mujer/ Body of a Woman.” It just has awesome imagery.

I’ve mentioned before that I am not trained in poetry. I don’t know how to read it or interpret it. All of these thoughts are my own impressions on this reading of the poems, not true analysis.

I picked this volume of Neruda’s poetry up because I saw his name on a Hispanic Heritage Month list somewhere and it piqued my interest. I am so glad I picked it up. It also counts for my Nobel Prize in Literature personal challenge. I will certainly be revisiting Neruda some day.

The House on Mango Street by Sandra Cisneros

While Cisneros did not originally write Mango Street in Spanish, she writes about a young Hispanic American girl growing up in an Hispanic neighborhood in Chicago. Esperanza is an awkward girl, and she is determined to someday leave her past behind and live the life she dreams of. It is a coming-of-age story and it reveals some harsh realities of the world she lives in, including the horrendous abuse her friends live with and the homesickness some have for the country they left behind.

I felt I could not relate to most of it, but I did appreciate seeing Esperanza’s growth. Her personal stories were those that I remember. In the end, she realizes that even as she moves beyond her childhood neighborhood, she must come back and remember those she’s left behind.

I read La casa en Mango Street for Hispanic Heritage Month (September 15 to October 15). (Obviously, I read it after the month ended, but oh well!)

Reading poetry in the original Spanish and in the English translation was eye-opening, as was reading prose in a Spanish translation and then visiting it in English.

How does a translator capture the feeling of poetry? The translator for Neruda’s poetry (W.S. Merwin) did a great job, and I felt Neruda was beautiful in both Spanish and English. While I am of course not a Spanish expert, in some cases, though, the English translation did seem to change the nuances of the beautiful Spanish.

Consider poem 12. In Spanish, it is called “Para mí corazón” (For my heart), which is taken from the first line, which is “Para mí corazón basta tu pecho.” In English, it is called “Your Breast Is Enough” after the first line, which is “Your breast is enough for my heart.” While those two lines say the same things, putting “breast” before “heart” in the title and reversing the order of the sentence seems to lose something. The order and emphasis is changed and I don’t think it’s quite as gorgeous.

On the other hand, there are some beautiful translations that capture the language, albeit in a different way. In poem 13 (“I Have Gone Marking”), the last stanza begins with three verbs: “Cantar, arder, huir” The beauty of those words are the differences: the –ar, the –er, the –ir verbs are all represented and each word sounds so different. I just loved it. The words in translation (“Sing, burn, flee”) likewise seem to capture the same feelings for me. It’s a word-by-word translation and it works just as beautifully in English as in Spanish.

Reading Cisernos’s prose in Spanish translation and then in the original English is harder for me to comment on. Because I wasn’t reading English as I went along (as I had with the Neruda), I was much more lost as I read the Spanish. Entire sections didn’t make sense because I was interpreting some words wrong. I’m not a dictionary user – I liked to learn from context and I don’t have patience to look up words constantly. But that was a mistake in my approach to this book. I would have gotten more out of my reading experience had I stopped and looked up some words.

After I read the book in English, I went back and compared the two versions. There were some disappointing translations that I believe changed the meanings.

For example, in one chapter, the girls are jumping rope to little rhymes. The rhymes were not translated: instead, completely different rhymes were inserted. The English rhymes had to do with Chicago: it gave the entire story a sense of place. Obviously, to literally translate the rhymes into Spanish wouldn’t make it the “familiar” rhyme it is in context in the Spanish book; there is logic to it. I was just surprised to see such a difference. It changed the overall feel of the book to not have the Chicago references.

There were also a few conversations in mixed English and Spanish that just don’t make sense much sense all in Spanish.

I guess my bottom line is, it seems best to read a work in its original language! Something is probably lost in translation, even if it is a great translation.

Although I’m glad I read both these works, I didn’t much enjoy my experience reading (or attempting to read) Cisneros in Spanish, simply because it was full of so much once-again new-to-me vocabulary. It also didn’t sound as beautiful and far-reaching. But is it truly fair to compare Neruda’s Nobel-worthy poetry to Cisneros’s prose-in-translation when I’m not looking in a dictionary?  No, I don’t think so. Neruda’s poetry was inspiring; it was sweeping; it was awesome. Cisneros’ prose was challenging, and it was prose, not poetry.

In the end, reading Neruda and Cisneros reminded me of how far I’ve fallen in being able to read Spanish. After reading Neruda, I have to agree with Cristina  García, who wrote in the introduction to Neruda’s poetry:

With their gorgeous sweep and intimacy, their sensuality and rhapsody, and their “secret revelations of nature,” Neruda’s poems also made me want to reclaim Spanish … after a long, long silence. (introduction, xvii)

Thank you, Neruda. You’ve encouraged me, too, to revitalize my Spanish.

Does anyone have any suggestions for reclaiming a struggling second-language ability?

Can you suggest a not-too-hard book in Spanish that I may have a good experience with?

I rarely get a chance to practice my Spanish in daily life (I remain at home with a two-year-old who doesn’t even speak English yet!), and I don’t have a television connection (nor would I like sitting and watching it). Maybe reading a children’s book would be easier. I also suspect I should find my old Spanish dictionary!