Draw-A-Saurus by  James Silvani (Ten Speed Press, September 2014) is the perfect book for a kid who love two things:

I know one such kid, so I was delighted to come across this book. With clear step-by-step instructions, the author/illustrator shows the process for drawing realistically proportioned dinosaurs of all kinds. There is plenty of amusing side-comments interspersed in with the illustrations. On top of all that, Mr. Silvani provides facts about the dinosaurs, including explanations of what things we know for sure and those we do not know for sure.

END_OF_DOCUMENT_TOKEN_TO_BE_REPLACED 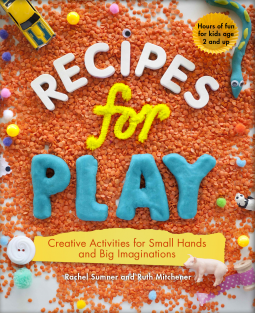 I am a mother that is not comfortable with mess. I don’t like noise or chaos either. And yet, I’m learning to adapt.

In fact, when I read Recipes for Play by Rachel Sumner and Ruth Mitchener (The Experiment, September 2014), I started actually getting excited about trying out some of the activities and crafts mentioned.

I’m a homeschooling mom. Another thing I never intended to do, and yet here I am. Homeschooling gets me out of my comfort-zone many times a day.

As I read Recipes for Play, which is full of play-crafts for young kids and mothers to easily recreate in their homes, I started to think of the many ways I could tie the suggested crafts in to our daily routine: some of them could be adapted for a homeschool lesson. Another one could keep my littlest one busy while I get a chance to over the math assignment with my son. The possibilities got me excited. END_OF_DOCUMENT_TOKEN_TO_BE_REPLACED

Good Prose: The Art of Nonfiction by Tracy Kidder and Richard Todd (Random House, January 2013) is a volume about what makes nonfiction great. Using their own experiences as a writer of nonfiction (Tracy Kidder, bestselling author) and an editor of creative nonfiction (Richard Todd, Atlantic editor), the two friends provide a compelling tale of what makes good writing good, and what makes a good writer a good writer, covering everything from how to begin and how to structure a narrative to the more complicated specifics of memoirs, essays, style, and writing as job in today’s society. END_OF_DOCUMENT_TOKEN_TO_BE_REPLACED

Just a few weeks before my second child, a daughter, was born, I stopped at a bookstore with my son and we bought her a book. It was Pride and Prejudice: A Babylit Counting Primer by Jennifer Adams and Alison Oliver. In just 10 pages, we visited the story of Pride and Prejudice by learning about some of the important countable nouns in it: FIVE sister, TEN thousand pounds. The pictures are modern, and for this particular “primer” the nouns highlighted are lots of fun. Will a baby “get” the plot of the classic novel? No, but it sure is fun for a mama who loves the book!

New to the classics for babies scene is the Cozy Classics series by Jack and Holman Wang (Simply Read Books, 2012). In a similar way, these books share the plot with the youngest people, but these books do with just one word on each page. It’s amazing how they manage to share so much of the story in one word per page! The accompanying pictures are photographs of needle-point felt dolls and scenes. I am not able to sew in anyway so this is very impressive to me too. I read the Pride and Prejudice and the Moby Dick Cosy Classics as digital review copies from the publisher. Does a child need to know “peg leg”? No, but the format is a fun one for the parent who loves the classics!

And then there is a more complete picture book version. I discovered Moby Dick: Chasing the Great White Whale by Eric A. Kimmel and Andrew Glass (Feiwel and Friends, 2012) as a part of the Cybils 2012 fiction picture book judging process. It is a poetic sea shanty retelling of the story of Moby Dick. Anyone who reads my blog knows that I love reading the classics, so I was delighted to see a picture book about a favorite book of mine, although I must admit I was surprised to see Moby Dick, of all classic books, retold in picture book format. The book is so much fun for someone who enjoys Moby Dick. It begins with “Call me Ishmael” and it really does capture the feeling of the book in some respects: the desire to go whaling, the night in the inn with a man with a tattooed head, meeting Captain Ahab, the anticipation of the chase. The illustrations are gorgeous paintings, and one can see the brush strokes in the marvelously rich pages. I really enjoyed seeing the story come to life in the pictures. And yet, there is something odd as a whole about this as a picture book. One of the things I love about Moby Dick is the rich language; so much of my enjoyment of the book depends on the eloquent ponderings of the narrator.

As a whole, the story of Moby Dick is rather gruesome: sailors hunting down a large animal and killing it in a brutal and disgusting way. In the picture book, the language is reduced to a sea shanty rhyme, and the illustrations do the talking. It’s a nice introduction to Moby Dick’s plot but do young children really need the plot? I also took exception to the “moral” added to the end of the picture book. Herman Melville’s creation is certainly not something that ends with a trite moral: it’s far more complicated than the plot suggests, and his purposes in writing it (the “moral” if you will) is something to explore in doctoral length dissertations, not picture books. I don’t believe it was necessary to sum up the book in such a trite way: I believe it detracts from the whole.

In the end, then, I’m rather conflicted about this picture book: I love it since I love the original, but I wonder as to the necessity of it for children. Do we really want to talk about chasing and killing whales with our young ones? Why not wait until children can experience Melville himself?