You are here: Home / Reviews / Child/Young Adult / Chapter Books / The Adventures of Pinocchio by Carlo Collodi

The Adventures of Pinocchio by Carlo Collodi is almost a fairy tale. There is a magical fairy, there are talking animals, and of course, there is talking marionette who wants to be a real boy. And yet, Collodi’s tale fell just a little short of fairy tale status because of the obvious moralizing lessons: the lessons substantially subtracted from the fairy tale-like charm. Nonetheless, children may enjoy Pinocchio’s adventures, and they will probably also learn from Pinocchio’s mistakes and scold him for his foolish choices as they follow him along the path to becoming a real boy.

I don’t know why I was surprised that it was a fairy tale: the talking marionette should have been evidence enough. Yet the first paragraph surprised me:

Once upon a time there was –

“A king!” my little readers will say immediately.

No, children, you are mistaken. Once upon a time there was a piece of wood.

Sure enough, the adventure story took Pinocchio through many lands over many years through seemingly random adventures, much as fairy tales (at least, the Grimm fairy tales I read earlier this year) feel random. Of course, Pinocchio begins with a talking block of wood, so we know something magical is happening. Then humans regularly converse with animals and fairies provide needed protection.  And it ends happily ever after (are you surprised?).

But Pinocchio is not like the brothers Grimm (thoughts here). In some respects, it’s much more human. In Grimm’s stories, the characters often felt like stereotypes acted upon by magical or wicked individuals. Pinocchio is also a stereotype – he is a marionette being “played on” by all around him as he lacks any common sense. And yet, the problems Pinocchio faces are ones he subscribes for when he disobeys his father. His problems come as a direct result of his disobedience, a human failing; the magical elements of Collodi’s fairy tale are incidental and “normal” as he goes about his adventures.

Pinocchio’s adventures began his second day of life, when he skips school to go to a marionette show, even though his dear father, Gepetto, had sold his coat to buy his new son a school book. Pinocchio is almost killed – and then saved! He is given money – and then tricked out of it! He is imprisoned and then released! – only to nearly drown! (I insert exclamation points to be intentionally sarcastic; while children may find Pinocchio’s adventures exciting, for this adult reader they became tedious.)

Pinocchio’s adventures continue, and he fails to learn the lessons he should learn, namely: 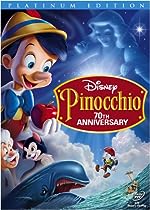 When it comes to Pinocchio, I think Disney succeeded in improving the original once again (as also was the case with Mary Poppins; thoughts here). In the movie, there is continuity to hold the story together, from the relationship between Gepetto and Pinocchio to the blue fairy and Jiminy Cricket.

In the movie, Gepetto is excited about the marionette he has just made; he wishes it were real, and that wish leads to the adventures. In the book, Gepetto begins carving a block of wood that is alive. When he has carved feet, the block of wood runs out of the house and Gepetto gets in to trouble. In the book, I felt little connection and “love” between Gepetto (who simply inherited a possessed block of wood) and Pinocchio (who repeatedly sought trouble from the very beginning). Since Gepetto is absent for the majority of the book, I wondered how Pinocchio learned all the sayings he is constantly recalling his father had taught him.

Finally, the movie had Jiminy Cricket. That, I think, was the best change Disney made. In the book, there is a “talking cricket.” But Pinocchio killed him with a hammer in the first few chapters, and all subsequent reminders of right and wrong came from the dead cricket’s ghost. While I admit that anything can happen in fairy tales, this element seemed especially odd as Pinocchio went about his adventures. In the movie, on the other hand, Jiminy was just another imperfect creature trying to help Pinocchio. Jiminy also had the blue fairy’s blessing, and that felt like another appropriate tie between the characters.

I guess you can say it took re-watching the movie to realize what was wrong with the book: the book lacked a framework, it lacked character depth, and it failed to develop the relationships that the movie successfully developed.

In the end, while The Adventures of Pinocchio was a fairy tale with fantastic fairy tale elements, magic, and a satisfying fairy tale ending, Collodi’s lessons made it feel didactic and his lack of intriguing characters made it hard to enjoy. I’m glad I read the original Pinocchio, but I’ll stick with Disney’s version for the foreseeable future.

Pinocchio counts for the Once Upon a Time III Challenge.

If you have reviewed The Adventures of Pinocchio on your site, leave a link in the comments and I’ll add it here.