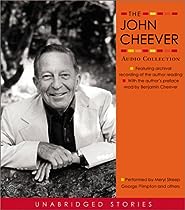 After I put down some of these thoughts, I found that Wikipedia claims Cheever is “the Chekhov of the suburbs.” At least I’m right on that! His stories did remind me more of Maupassant’s stories, but still, the title fits him.

My favorite story of these twelve was The Enormous Radio. It had a supernatural element, as some of Maupassant’s stories did, and yet it felt real. In that story, a couple gets a new radio. After a day or so, the wife realizes that listening to the radio allows her to hear the private conversations of the people living in the apartment complex around her. At first, she loves this new ability to pry into other people’s lives; by the end, she realizes her life and problems are just like theirs.

The Enormous Radio reminded me strongly of all the “reality” things people have now to make their private lives public: twitter, blogs, television shows. People don’t hesitate to share with strangers the intimate struggles of their lives, and as Irene realized, that’s not always nice. Her life became one of listening in, and she neglected her own life. It became rather depressing.

Many of Cheever’s stories felt like they ended suddenly. Because I was listening to them, I wasn’t always sure if the story was over or my audio had cut out (which happened a few times too). When a story just ended suddenly, I sometimes felt I’d missed something, so look forward to rereading. I liked the stories, depressing or not, and the majority (all?) were depressing.

Now I intend to keep reading a few of Cheever’s stories every week.

If you are intimidated by his 800+ pages collection of stories, this audio selection is well worth your time. You can get a glimpse of Cheever’s stories without being overwhelmed, and they are well read by the readers for your enjoyment.

If you have reviewed The John Cheever Audio Collection or any Cheever stories on your site, leave a link in the comments and I’ll add it here.