You are here: Home / Reviews / Drama / The Magic Flute by Wolfgang Amadeus Mozart and Emanuel Schikaneder

The Magic Flute (Die Zauberflöte) by Wolfgang Amadeus Mozart (music) and Emanuel Schikaneder (libretto) holds a special place in my life: it was an opera my husband took me to when he was courting me. It’s been four years now, but I still feel giddy when I think about that special time when we were dating.

I’ve wanted to revisit the opera since then. I can’t exactly go to the opera these days (that’s what a baby and buying a house has done to my entertainment budget!) but I have had a wonderful time in the past few weeks visiting the opera in a number of forms.

The Magic Flute has a fun story, but when I try to write it out it sounds lengthy and/or rather complicated. It’s not. Wikipedia has a great extended summary and analysis, as well as a few sample arias (including my favorites!).

Although I know this summary sounds wrong and possibly uninteresting, here is an attempt.

The Magic Flute is a fairy tale story of a man (Tamino) sent on a quest by a sinister queen (the Queen of the Night) to rescue the Queen’s daughter (Pamina), who conveniently is the woman of Tamino’s dreams. The extremely amusing bird-catcher (Papageno) accompanies him. The queen gives Tamino a magic flute and Papageno magic bells to help them on their journey. As they rescue Pamina, a mysterious priest (Sarastro) gives the two of them (and later Pamina as well) various tests to show their worthiness for marriage. All ends happily ever after (except, maybe for Pamina’s mother, the Queen of the Night, who turns out to be rather insane).

There is so much more in this opera, and I don’t know how it sounds trying to summarize it like that. The story can be approached on the surface, or one can look at all sorts of symbolism. This time around, I preferred to enjoy the superficial aspects of the story and the music. I let myself get swept up in Mozart’s melodies: they just fit and the more I knew about the story, the more I enjoyed the music.

Although the story is also fun, I mostly enjoy The Magic Flute for its music. 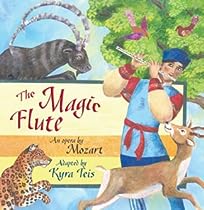 When I first started blogging, I found a review of a children’s book about the opera. (I cannot find who it was! If it was you, tell me and I’ll link to it.). It’s taken me this long to find the book and read it. And I love it! The Magic Flute, adapted and illustrated by Kyra Teis, has gorgeous paintings and tells the story well. It’s just perfect for a child in introducing a fun and magical story.

For a number of reasons, various plot elements (side stories) are omitted from the picture book. The racism, the wicked Monostatos’s temptations (he almost rapes Pamina), and the ritualistic moments are omitted from the story, so the entire story becomes much simpler. I think it helped me to read this before I went back to approach the opera.

Obviously, reading an opera in a picture book eliminates something important: the music. I love the music, so reading the book is not the same. That said, at the end of the picture book is a page of tips from the illustrator for how to approach the actual opera, and what to look for. I appreciated the reminder that the story is just a small part of this experience, and I think reading the story of an opera is a great way to get children interested in the form. I only wish I owned this book so I could read it more often!

After I’d read through the picture book, I stumbled upon the Chicago Lyric Opera’s commentary CDs (While I can’t find the past seasons for sale anywhere online, the 2009-10 season will be streaming free of charge on the Lyric Opera website throughout the season!). The commentary for The Magic Flute was wonderful! The person commenting on the play was sarcastic and fun as he went through both the plot and the significant musical elements one should note throughout to the opera.

The commenter was funny. He had no qualms mocking Tamino for his weakness (since he faints a few times in the beginning) and his stoic not-very-fun approach to the challenges (Tamino is very obedient to everything he is told). In fact, at one point, the narrator mentions that Tamino would not be any fun at a party he’s so boring. The narrator also humorously diagnoses Pamina’s mother, The Queen of the Night, as psychotic. (You can tell when you listen to her extreme singing that she’s a bit unstable.)

Beyond the amusing look at an amusing opera, he also explains the significance of the melodies, some facts about Mozart’s inspiration, and so forth. For example, it interesting to me that although the opera seems to discriminate against woman (after all, the message seems to be “this woman is your reward”) Mozart has included things that seem to be progressive: Pamina joins Tamino for the final tests and occasionally there are some references to not just “man and wife” but also “wife and man,” which puts the two on “equal footing.” No, it’s not exactly liberation by today’s standards, but it was interesting to learn the 1790’s perspective.

I also learned that because there is spoken dialog as well as singing, The Magic Flute is not technically an opera but a singspiel. (I still am referring to it as an opera.)

In between the commentary are excerpts from the songs so we can get a feel for the opera. I look forward to visiting other operas in such a manner! It was wonderful.

I watched the movie of the opera as well, but it was a disappointing amateur production. I can’t say that watching bad acting and listening to poor renditions of the songs helped me, but I suppose seeing it acted out and reading the entire libretto in the subtitles helped me get a better feel for the opera. It is so funny!

At one point shortly after I was married, I recall my husband mentioned that my very inexpensive recording of a classical artist was poorly done.

“Oh, come on. There’s no difference! The artists just play the notes!” I replied.

Um, I was wrong. After listening to a few different recordings of the Queen of the Night’s solos, for example, I can promise you: an amateur recording is simply bad. A professional recording is incredible. To realize that I can hear a difference is incredibly exciting: my ear is being trained!

I had, of course, seen the play in Chicago with my husband-to-be a few years ago, as I mentioned, but it had been a long time. I appreciated seeing it again – even if it was amateur.

After watching the movie, I listened to the opera music on CD as I drove to my mother’s house. The drive takes about an hour each way, so the round trip got me through the entire opera. It was beautiful to just be wrapped up in the music. I love it! The version I listened to was beautiful.

My favorite songs are those of the Queen of the Night, but Papageno’s songs also top my list. The Queen of the Night has a particularly high and delightfully tension-filled song when she’s commanding her daughter to kill Sarastro. I think it is simply beautiful, especially when considered in context.

I also particularly love the duet when Papageno first meets Pamina. After he tells Pamina that Tamino loves her and is coming to rescue her, the two sing about how delightful it must be to fall in love and be married: “Man and Wife! Wife and Man!” They sing such a beautiful melody. It’s simply a gorgeous song.

And then there is Papageno’s song with his true love match, Papagena. This is just plain fun: they stutter over each other’s names and then sing about the children they will have together: a boy named Papageno, a girl named Papagena, and then another Papageno, etc. (The commenter I mentioned above says, “It sounds like they are going to populate the earth with their children!”)

I had intended to read the libretto too, but I think I’m Magic Flute-d out for now. Maybe next year or the next I’ll revisit it again. Or at least listen to the music again: it is so beautiful! While the story is entertaining and deep, it’s the music I truly love.

Which would you rather attend: an opera or a monster truck rally?