The Silmarillion by J.R.R. Tolkein 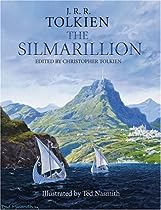 In flowing, beautiful language, The Silmarillion tells the origin and early tales of J.R.R. Tolkein’s middle-earth. Written as “Elven” songs, The Silmarillion is dense at times. Yet as the tale of the creation of Arda and the children of Ilúvatar (both Elves and men) unfolded, I was in awe of not just Tolkein’s incredible control over language but with his unbounded imagination in creating a new world with new gods, fantastic creatures, and a familiar story of good versus evil.

I don’t think so.

I have never read The Hobbit. I have never read The Lord of the Rings (although I started once). I watched the movies and was entertained. And then, as my husband and I read The Silmarillion together over the past six months, reading about 20 pages a week, I personally have come to love the style, the stories, and the world Tolkein has masterfully created.

The Silmarillion is written as epic stories (supposedly sung by Elves from generation to generation). Tolkein has written in a writing style somewhat reminiscent (although more beautiful) of the King James Version of the Bible, which makes for challenging reading sometimes. Also, in the spirit of Greek mythology, there are lots of god-like immortals, which became rather confusing. Dozens of names sound alike; if I tried to sort them out, I started to get confused.

But The Silmarillion is far more beautifully written than any other “old-fashioned” writing, and I found the legends of the middle-earth Elves to be fascinating. Because I was reading The Silmarillion so slowly, I “let go” and decided I didn’t care if I sorted out each name as I came to it; I just enjoyed the language and the story. This approach worked quite well for me. I enjoyed it, and while I might not be able to tell you how each story related to each other, I don’t think it really matters.

An Example of the Language

In the “Ainulindalë,” Ilúvatar (the father of Elves and men) called the Ainur (the god-like leaders) together and instructed them to make a symphony, which would help create the world:

Then the voices of the Ainur, like unto harps and lutes, and pipes and trumpets, and viols and organs, and like unto countless choirs singing with words, began to fashion the theme of Ilúvatar to a great music; and a sound arose of endless interchanging melodies woven in harmony that passed beyond hearing into the depths and into the heights, and the places of the dwelling of Ilúvatar were filled to overflowing, and the music and the echo of the music went out into the Void, and it was not void.

But when they were come into the Void, Ilúvatar said to them: ‘Behold your Music!’ And he showed to them a vision, giving to them sight where before was only hearing; and they saw a new World made visible before them, and it was globed amid the Void, and it was sustained therein, but was not of it. And as they looked and wondered this World began to unfold its history, and it seemed to them that it lived and grew.

In the next few hundred pages, we, as readers, join the Elves in recalling the history of the world, as the Children of Ilúvatar lived and grew.

I personally think this writing is absolutely beautiful! If you don’t think so, you may not like reading The Silmarillion, for much of the language follows similar sentence structure.

I admit that I did get bored reading the end-matter in our version, which I read by myself. The “facts” sections didn’t have a story line and I’m not a “die-hard” middle-earth fan, so while marriage customs of the Elves was interesting, it wasn’t engaging.

In some respects, people may think that The Silmarillion itself does not have very much story line. It’s true that in places Tolkein details geography and genealogy in excess. But I’d suggest that even when the story is weak or more informational than interesting, Tolkein’s language brought me back into the book. The end-matter lacked much of the entertaining language, possibly because much of the book was compiled from J.R.R. Tolkein’s notes by his son, Christopher Tolkein, after he died; the end-matter sections may have actually been compiled by Christopher, and not J.R.R. Tolkein.

I always swore I’d never read any Tolkein, especially when I tried reading the trilogy a few years ago and got very bored. But now I’ve read The Silmarillion. The bottom line is, while I’ve only stumbled through The Silmarillion once, over the course of six months, I did enjoy it. And I now look forward to reading The Hobbit and the trilogy.

If you have read The Silmarillion, did you find it a challenge? Are you a fan of Tolkein?

If you have reviewed The Silmarillion on your site, leave a link in the comments and I’ll add it here.