An Ambush of Tigers by Betsy Rosenthal (Picture Book Sunday) 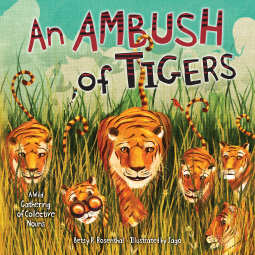 An Ambush of Tigers by Betsy Rosenthal (Millbrook Press, April 2015) is, as the subtitle describes, a “Wild Gathering of Collective Nouns.” Each of the collective nouns she has chosen has a double meaning and Jago’s delightful illustrations play up the double meaning for some amusing images that are not soon to be forgotten.

Some of the collective nouns are obscure, or at least, in my 34 years I have never heard of them, like a “tower of giraffes” or a “labor of moles.” But with a nice glossary at the end of the book, kid readers can get the double meanings behind the words and review the collection nouns they learned while reading the picture book.

Although the rhymes make for a fun read-aloud, I have to say I love the zany illustrations best. Jago’s website explains that he creates his illustrations almost entirely digitally. Yet, each image has a linen texture and the animals on each page have an caricature look to them, all while being incredibly detailed.

The delightful images truly give life to Rosenthal’s collective noun poems. It’s not often one would think of a book about collective nouns (an issue we could study in our homeschool!) could be so funny and rereadable. I look forward to sharing this gem with my kids!