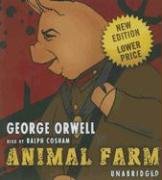 Put into the cultural context in which it was written, however, Animal Farm clearly mocks the rise of communism in Russia. To me, Animal Farms‘ ironic humor becomes all the more sad when one realizes the correlating story among humans suffering in Orwell’s contemporary Russia. I liked rereading Animal Farm, and now that I understand a bit more of the context, I found it quite sad, and not nearly as funny as the first time I read it.

I read Animal Farm for the Martel-Harper challenge. In the letter that Yann Martel sent to Stephen Harper, Martel shares how literature makes history portable:

Animal Farm is a perfect exemplar of one of the things that literature can be: portable history. A reader who knows nothing about 20th-century history? Who has never heard of Joseph Stalin or Leon Trotsky or the October Revolution? Not a problem: Animal Farm will convey to that reader the essence of what happened to our neighbours across the Arctic. The perversion of an ideal, the corruption of power, the abuse of language, the wreckage of a nation-it’s all there, in a scant 120 pages. And having read those pages, the reader is made wise of the ways of the politically wicked. That too is what literature can be: an inoculation.

Because I’m not all that familiar with the details of the beginning of the USSR, I defer to the Wikipedia experts for that. The Wikipedia entry for Animal Farm clarifies who some of the animals may represent: each character seems to directly relate to actual people in Russian history.

Animal Farm has been called an allegory, a satire, and a fable. I defined satire a few months ago; now it’s time to visit allegory and fable.

allegory, noun, 1: the expression by means of symbolic fictional figures and actions of truths or generalizations about human existence ; also : an instance (as in a story or painting) of such expression
2: a symbolic representation : emblem (Merriam-Webster.com)

In A Handbook to Literature (eighth edition), Harmon and Holman go beyond the basic dictionary definition to explain that allegory is a form of metaphor. That is, that

objects, persons, and actions of a narrative are equated with meanings that lie outside the narrative itself. … it represents one thing in the guise of another. (page 12)

Harmon and Holman also clarify that allegory differs from symbolism: symbolism doesn’t necessarily incorporate ideas into the structure of a piece as does allegory. Types of allegory include parables and fables.

fable, noun, : a fictitious narrative or statement: as a: a legendary story of supernatural happenings b: a narration intended to enforce a useful truth ; especially : one in which animals speak and act like human beings c: falsehood , lie (Merriam-Webster.com)

I was surprised to learn that fables especially have animals speaking and acting like humans. That puts Aesop’s Fables into perspective. I read and reviewed them last year, but I didn’t think about what that term means. Most of Aesop had animals acting as humans, and the results “taught” the reader a lesson.  Harmon and Holman share a few notable fables other than Aesop, including Kipling’s Just So Stories, which I also read and reviewed last year (not realizing they were considered “fables”). Harmon and Holman define fable as “a brief tale told to point to a moral” (page 207).

Maybe this is blasphemous, but I don’t particularly think Animal Farm is a spectacularly written book: I don’t feel very drawn into the language. It was a short novella, and I felt Orwell “told” more than he “showed” in many of the sections.

That said, I do think Animal Farm is a remarkable little novella. It was written for its story, and Orwell did a great job of creating a “realistic” allegory to illustrate his purpose. Animal Farm is clearly an allegory in the form of a fable. In places it feels heavy-handed, but that is the purpose of allegory. In some respects, Orwell wrote it to be heavy-handed. He’s purposely trying to represent something. As Yann Martel said in his letter to Stephen Harper, it’s a political book, and “It deals with one of the few matters on which we can all agree: the evil of tyranny.” I think that theme makes it great.

(Not surprisingly, Animal Farm was rejected by many publishers during World War II; it was not published until late 1945. This is, of course, despite the fact “Russia” is never mentioned in its pages.)

Someone suggested to me that Animal Farm is a novel to read once: it doesn’t speak to one person individually, but rather comments on a situation. However, Animal Farm shows up on many “best novel of the century” lists. I’m not sure what I think about either of those classifications. I, in fact, did reread it, but I do think there are better “best novels” out there.

What do you think about Animal Farm? Did Animal Farm speak to you personally, as novels sometimes do? Or is this a novel written with a purpose that eludes you? Or, does the heavy-handed purpose help you like it more? Should Animal Farm remain on “best novel of the last century” lists, or should it be stricken?

If you have reviewed Animal Farm on your site, leave a link in the comments and I’ll add it here.