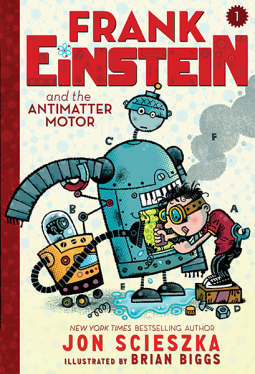 Frank Einstein and the Antimatter Motor by Jon Scieszka (Abrams, August 2014) is a bizarre and amusing story about a boy scientist named Frank Einstein who, with his best friend sidekick and two intelligent robots, is determined to win his science fair project. Of course with a grandfather named Al Einstein (no, not that one but still…), Frank’s project is destined to be the best of them all! Or will it? His arch nemesis is determined to stop him.

Scieszka has written many other out-of-the-box children’s stories (my favorites have always been The Stinky Cheese Man and The True Story of the Three Little Pigs) so I’ve always been partial to his humor. It’s bizarre. There are plenty of jokes that kids will not get, and of course the exaggerated science must be taken with a child’s appreciation on reading. But Frank Einstein’s adventure is a fun ride, regardless of the fact that I am an adult!

The book has been written with an easily accessible reading level, and I’m always happy to find a new series with science and boys as the center of attention. My son does not like sports as many boys do, and resists the suggestion when I give him a book series with girls as the lead. Boys + science + wacky humor = something that my son will like when he gets a little older.

I’m so pleased by this book. As I said, as an adult, there were some slightly annoying aspects to it. But I am not the target audience, and I’m happy to say that Frank Einstein and the Antimatter Motor is a book I’d be happy to hand to my child. What will Frank come up with in the next adventure?

Note: A digital copy of this book was received for review consideration.