Time is running out this year, so some of my categories for my discussion of the Cybils awards may seem a bit of a stretch. The fairy tales books I share about below are quite different from the folkloric books I also share about.

Nevertheless, despite the slightly messy attempts at categorization, I have enjoyed so many of these books I’ve been reading. I hope you find something below that may interest you as well.

King Hugo’s Huge Ego by Chris Van Dusen (Candlewick, 2011) is a funny story about a very short king that thinks too highly of himself. When he is rude to a young woman who happens to have magical powers, she makes certain he’ll reap his just rewards. His head swells to humourous consequences, and in the end, he learns his lessons. Chris Van Dusen’s illustrations are, as always, spectacular. This particular book is bright and cartoonish; the young reader in me (not to mention my son Raisin himself) couldn’t wait to see just how the king’s enormous ego would be portrayed on the next page. A happily ever after fairy tale we all can learn from. (Nominated by Read Aloud Dad)

The Princess and the Pig by Jonathan Emmett and illustrated by Poly Bernatene (Walker and Company, September 2011) is the story of a princess and a pig whose parents believe they are in a fairy tale. In a rather amusing switch, a baby princess is swapped with a baby piglet. The farmer and his wife are amazed that the piglet has been switched for a baby girl, and the Queen and King believe their daughter has been cursed to become a pig. As the “children” grow, there are obviously a few difficulties in raising the pig as a princess, but the Queen and King don’t worry: “It’s the sort of thing that happens all the time in books.” With hilarious results, and ridiculous paintings to narrate the story, The Princess and the Pig is a satisfying story of a fairy tale that isn’t, much to the reader’s satisfaction. (Nominated by Becky)

Dog in Boots by Greg Gormley and illustrated by Roberta Angaramo (Holiday House, 2011) tells the story of a bookish dog who wants to find wonderful boots like the fascinating cat he read about in a storybook. (He apparently loves to read fairy tales.) But each pair of shoes he finds has some flaw that makes life as a dog difficult. I love the brightly painted illustrations, and one can’t help but love Dog, who of course comes to find that he’s perfect just the way he is. (Nominated by Kathleen Morandini) 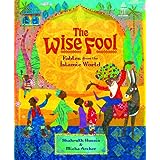 The Wise Fool: Fables from the Islamic World by Shahrukh Husain and illustrated by Micha Archer (Barefoot Books, 2011) tells the fables of Mulla Nasruddin, a fabulist I was unfamiliar with. Mulla, who is called a “wise fool,” comes from the Arabian Middle East and reaches in traditions to as far as Greece, parts of Russia, and even China. I loved the stories in this collection, and I’m amazed I hadn’t heard of the storyteller before. Using his cunning, Mulla is able to wisely judge between a shopkeeper and a beggar, for example. Sometimes he does seem like a fool in his responses, but really, his comments show cleverness. In one story, he is fishing and a man calls from the other bank of the river asking how he can cross. “You’re already on the other side of the river,” Mulla responds. The Mulla’s clever and sometimes not so clever responses are funny to read, and I greatly enjoyed the book. The text is dense for each page, so it is not a read-aloud picture for young children. Nevertheless, the illustrations that are on each page are wonderful collages of architectural designs and people from the many regions in whith the Mulla’s tales have traditionally be popular, and the illustrator use tissue papers and fabric, colors, and cut papers to give the variety of traditions a life of their own. A wonderfully executed volume of fables!  (Nominated by Eric Robbins)

Aesop’s Fables by Beverley Naidoo and illustrated by Piet Grobler (Frances Lincoln Children’s Books, 2011) adds a new multicultural layer to Aesop’s tales. Using her knowledge of African folktales and noting the similarities to Aesop’s own tales, South African author Beverley Naidoo gives an African twist to the tales that seems remarkably appropriate. I grew up loving Aesop’s fables and “morals” and this volume is no exception to well retold tales for children. Each fable has a two- or four-page spread and the text is large and non-intimidating. Piet Grobler’s pencil and watercolor illustrations match the African feeling of the stories with colorful emphasis on the setting. (Nominated by Jennifer Abel)

Never Forgotten by Patricia C. McKissack and illustrated by Leo and Diane Dillon (Schwartz & Wade, 2011) tells the African tradition of the slave trade through rhythmic verse and using the Mother Elements that African tales focus on: Earth, Fire, Water, Wind. A young boy in eighteenth-century Africa is training to be a blacksmith like his father when he is captured by slave traders and taken to America. His father and those in Africa who miss him seek help from the elements in finding out where he went. I personally loved the perspective from the African traditions, for American history does not often consider the African side of the horror of the slave trade. The Dillon’s illustrations match the tone of the poetic text wonderfully, and I loved the ultimate full circle effect of the wind discovering Musafa/Moses’ ultimate fate in America and how it comforts the forlorn father. Wonderfully rendered: incredibly important folktale. (Nominated by Betsy Bird) 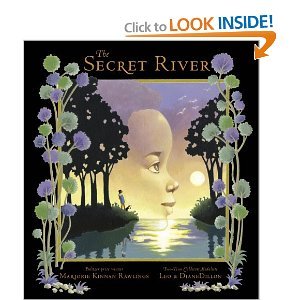 The Secret River by Marjorie Kinnan Rawlings and illustrated by Leo and Diane Dillon (Atheneum Books, 2011) is a unique Cybils 2011 fiction picture book nominee in that it is a republished version of a children’s story that received the Newbery Honor in 1956. It is clear why it did receive recognition. It is a deceptively simple story of a girl who discovers a secret river full of fish, thanks to the directions of the wise Mother Albirtha. Calpurnia catches the fish from the gorgeous Secret River to save her family and her village from starvation and poverty during difficult economic times. Once times are better, however, she can no longer find the Secret River. Calpurnia’s tale celebrates the assistance of a child who saves the day, and the magical aspects of the hidden river gives her story a depth of mysterious excitement that I imagine children would enjoy. Further, the newly produced illustrations for this tale, rendered by the Caldecott Medalist team of Leo and Diane Dillon, are simply gorgeous, adding a depth of magic and beauty to the story that enhances the reading experience for the adult and child alike. The Secret River is highly recommended, well deserving of its original Newbery Honor and definitely worthy of a reissue with such apropos illustrations. (Nominated by Laura Wadley)