Whenever I see a copy of Winnie-the-Pooh in a store, on a shelf, anywhere, really, I pick it up and hold it. I flip the pages. I pause over the pictures (whether they are in color or not). I wish I could own it.

But why? I already own a lovely hardcover in color (along with Pooh Corner) and a volume of The Complete Tales and Poems of Pooh. If I want to read it, I can just go home and read it!

Yet, there is something about this Bear of Very Little Brain that makes me want to own him.

My recent poetic attempt may illustrate how much I enjoyed my recent reread of these classics. So I searched out other Pooh books from the library this month.

I was disappointed to find that the children’s section had mostly Disney-inspired stories about Winnie-the-Pooh. Now, I love the Disney movie well enough, but in a book? I don’t want to learn how Winnie-the-Pooh went to school or the doctor. Winnie-the-Pooh should primarily be about the imaginary world of the Hundred Acre Wood as created by A.A. Milne and Ernest Shepard. (I also refuse to watch the new Disney Pooh movies. That is not true Pooh.)

I was pleased to find, upon further exploration, some Shepard-illustrated Milne stories in smaller format. 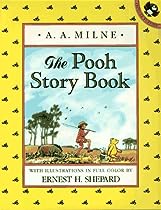 The Pooh Story Book has three chapters from the novels, but it’s in a nice-sized story book. It is, essentially, the chapters by Milne and the illustrations by Shepard excerpted from the books and put into a different format. I like this very much, and it’s definitely less bulky and intimidating than the entire book. The print is large, so I imagine older children wouldn’t mind it. My two-year-old loved flipping through it.

A few weeks ago I also found a tiny little board book with Milne’s words slightly rephrased (and obviously abridged) and Shepard’s drawings. (Great news! I just found this set online! It’s used of course, but I’m just happy to find it. Yeay! Don’t buy all the sets, I want one!) I loved the board book format, and so did my son.

And then I found a number of other Pooh-inspired books featuring the true Pooh of Milne and Shepard.

The Pooh Sketchbook contains the preliminary sketches by Ernest H. Shepard. Some of these sketches are compared to the final illustrations, and all of them are rather delightful. There are few words in this book, and my son enjoyed flipping through it too: “Pooh!” he said, over and over. It’s nice to see Pooh grow up from beginning bear to mature Pooh.

The Pooh Bedside Reader by A.R. Melrose is a bit different (and  it seems to be out of print, as I can’t find it on the Amazon site). The complete subtitle is “In Which the Beloved Creations of A.A. Milne and Ernest H. Shepard, Through Smackerels of Verse, Amusing Excerpts, Anecdotes, Memoirs, Reviews, and Autobiographies, Are Affectionately Celebrated by A.R. Melrose.” And that is what it is. Chapter by chapter, Melrose reviews the characters of the Hundred Acre Wood, looking at the “real” ones (such as the boy Christopher Robin), finding excerpts from the book to illustrate the personality traits, and otherwise reminiscing about the beloved characters. It’s not dense at all, and at less than 160 pages, I’d say 50 were complete chapters excerpted from the novels (I skimmed some of those since I’d just reread the books). There are even excerpts from The New Yorker‘s very disparaging review of Milne’s books. Rather amusing, if you ask me.

The Pooh Bedside Reader is about “everyone being together in the Forest. And us coming to visit.”  (page 4). And that is what I felt I was doing. After each chapter, I’d realize that that character is my favorite: “Oh, that’s right! Pooh is my favorite!” or “Christopher Robin is certainly my favorite” or “Poor Eeyore! I love him so much that he must be my favorite.” I couldn’t decide, and I think that was the joy of it. I now want to go back and reread all of Milne’s novels (except I won’t because I just did). I want to sit and ponder the joy of childhood.

One quote stood out to me, and that was Christopher Robin Milne’s thoughts on his stuffed animals, the  original inspiration for the stories. Although they are sitting in the New York Public Library, he doesn’t (or didn’t) think about them or miss them, much to the surprise of many people.

I’ve found a number of other books featuring Milne’s words and/or Shepard’s illustrations. Maybe someday I’ll get to them all: never fear! It is not all Disney out there!

A note: I came across the Spanish translation! How fun! Now you all know what I want for Christmas. (I’m so excited I don’t think I can wait that long. Maybe next month I’ll buy a book for myself?)

What book(s) are you always tempted to buy, for no good reason and even if you already own one or two copies of it?

Are you true to the True Pooh? Or have you even ever met him?

Did you have a “real” animal/doll friend when you were a child?

Winnie-the-Pooh and The House at Pooh Corner by A.A. Milne

Consistency Errors in Goodnight Moon and Other Book Issues for an Obsessive One-Year-Old
Reviewed on September 24, 2009
Previous
Next