Painting a Novel: East of Eden by John Steinbeck

My writing teachers have always instructed to “show not tell.” I didn’t understand it, really, until I began to read John Steinbeck’s East of Eden last month.

I thought “showing” meant describing the character in a context: hair color, quirks, and personality traits are mentioned as the story unfolds. Here’s a silly example I just thought of: “She tossed her mousy brown hair over her shoulder, crossed her arms in front of her, and narrowed her dark brown eyes as the wicked man sauntered toward her.” With that type of description, I can picture what is happening: the movie is playing and I don’t need to guess what people look like or how they react to a situation.

Steinbeck does not do that. He steps aside from the plot development to show us who these characters are. This could be boring—but it is not when Steinbeck does it. Here are a few paragraphs describing Liza Hamilton.

Liza Hamilton was a very different kettle of Irish. Her head was small and round and it held small round convictions. She had a button nose and a hard little set-back chin, a gripping jaw set on its course even though the angels of God argued against it.

Liza was a good plain cook, and her house—it was always her house—was brushed and pummeled and washed. …

She wore her hair always pulled tight back and bunned behind in a hard knot. And since I can’t remember how she dressed, it must have been that she wore clothes that matched herself exactly. She had no spark of humor and only occasionally a blade of cutting wit. She frightened her grandchildren because she had no weakness. She suffered bravely and uncomplainingly through life, convinced that that was the way her God wanted everyone to live. She felt that rewards came later.

Steinbeck’s approach gives us a description of this woman as if he were describing a photograph (her head, her nose, her chin, her hair) and we can picture Liza in our minds because the description gives us the information a photograph would. But Steinbeck is also able to give her a personality: Liza Hamilton becomes real to me. As a result, as the novel progresses, I am able to anticipate how she would react simply because her character is so full of life. That is hard to do.

And guess what? She was real: Steinbeck based Samuel and Liza Hamilton in the novel on his own maternal grandparents of the same name. That underscores what I’ve always known: write what you know about and it will come alive. By extension, if a writer doesn’t know a character (or a setting or time period)—her personality, physical description , and personal history, for example—he can’t truly describe her so the reader feels he knows her too.

Have you ever looked at an oil painting up close? Some strokes of color are thicker than others; each stroke of paint leaves a texture. The painting may not look like a photograph: the colors will be different and the artist’s interpretation of the person, place, or thing will be different from the “real thing.” But often there is a texture that makes an oil painting much more interesting than a photograph would be.

Steinbeck writes an oil painting. He paints the characters, the setting, and the decades. I recognize the textures as I read the novel. It feels rich and full of life, and I love to read it. Truly, this texture helps make it a classic.

I have much more to say about East of Eden. But, for now, tell me: can you recommend any other novels that you feel “paint” the characters, the setting, and the time period? I want to read more.

East of Eden by John Steinbeck (Thoughts on a Reread) 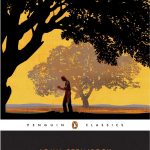 East of Eden by John Steinbeck

The Stranger by Albert Camus
Reviewed on April 9, 2008
Previous
Next