I spent two months in Jerusalem in 2000 as part of a religious study abroad experience. While our focus was on Old and New Testament Biblical studies, I also got a healthy dose of Jewish and Palestinian history and religious information. I loved my time there and I loved the people I met – Jew, Muslim, and Christian.

When I found Palestine, Joe Sacco’s journalistic report of the intifada circa 1992, I thought I’d experience another graphic novel, this time an account of a place I’ve lived. But the world Sacco explores is not the world I visited.

Sacco’s account focuses on the horrible conditions of the Palestinian refugees in Israel, the torture of the Isreali Defense Forces, and the reasons why the youth felt the need to rise up in rebellion in the intifada. While I can’t say I loved the blatant anti-Jewish slant of the book (which was to be expected), it was a fascinating experience to read it and I learned a lot that I hadn’t realized.

Palestine is horribly violent and painful to read. And yet, that is exactly Sacco’s purpose in writing it.

As a journalist, Joe Sacco went to Gaza and the West Bank looking for stories of pain and suffering. And he found it. The Palestinians were driven out of their homes in the 1960s, and 25 years later, they are still living in camps without paved roads, proper toilets, or roofs over their head. Their family members are jailed by Israel without being given a reason and tortured horribly because they won’t reveal the information that the soldiers want, information that they don’t actually know.

Reading Palestine made me very angry at Israel, a country that tends to get only positive press in the USA. That, again, was Sacco’s purpose. I don’t feel torture is acceptable in any circumstance: not in Guantanamo Bay by the CIA, not in Gaza by the IDF. Palestine made me angry at all governments that practice torture. 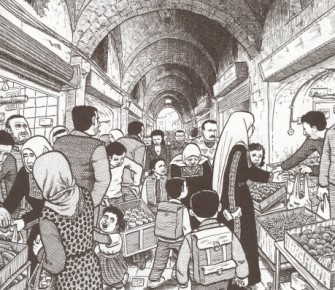 As a graphic novel, Palestine is incredibly powerful. I really loved Sacco’s detailed and powerful illustrations, and having the story partly told via the pictures made it less painful – and yet more painful: he didn’t have to describe the torture methods because they were illustrated for me to see. My only previous experiences with graphic novels were The Complete Maus and Persepolis I and Persepolis II. This was different than those in that many pages didn’t have picture boxes of story action and dialog: often, Sacco drew a full page illustration with text boxes splattered throughout it. A few pages were all text; it was very text heavy. However, it was a perfect format for trying to capture the events, background, and despair prevalent.

Since I spent time in Israel-Palestine 8 years ago, during the second intifada, I found familiar aspects in his story: for example, the young boys follow him, call him something in Arabic, and then throw stones at him; that happened to me on occasion as I walked to the Old City from where I lived. But there were differences too. Apparently the Old City didn’t feel very safe to many people; when I was there, I felt safe. I felt that the violence had ceased, although I did see tire burnings on occasion. (Ehud Barak was about to entered in to peace talks, talks which I predicted erupting in violence come September 2000 — they did). I certainly hope that there wasn’t torture occurring in prisons, but I wouldn’t have known if there was.

In the end of his report, Sacco wrote:

…that’s the thing about coming to the Holy Land or Palestine or Israel or whatever you want to call it … no one who know what he’s come here looking for leaves without having found it. (page 280)

I went to Jerusalem looking for holy sites and inspiring religious experiences. I found those. Sacco went, 8 years earlier, looking for Palestinian suffering. He found it. If you are looking for the beauty of Israel, you’ll find that too. It is beautiful land.

Palestine is a painful graphic novel to read. Don’t expect a “comic.” There is nothing comical about the things Sacco experienced. But if you are interested in Middle Eastern affairs and curious about the plight of the Palestinians circa 1992, read Palestine and prepare to be horrified and enlightened.

If you have reviewed Palestine on your site, leave a link in the comments and I’ll add it here.

The Complete Maus: A Survivor’s Tale by Art Spiegelman

The Picture of Dorian Gray by Oscar Wilde (+ graphic novel version)
Reviewed on October 27, 2008
Previous
Next