Shakespeare on Toast by Ben Crystal (Icon Books, September 2012) purports to be a book for young adults, providing a look at Shakespeare as “as easy to handle as beans on toast”. That must be a British thing because beans on toast sounds pretty gross to me. (I don’t like beans.) At any rate, Shakespeare on Toast is delightfully refreshing in it’s overview of Shakespeare’s time and writing styles. Although I am pretty well read on Shakespeare, reading it taught me a lot and got me excited once again to read the Bard’s words. Success!

The author, Ben Crystal, comes to Shakespeare with an actor’s background, and this was a nice new perspective for me. I’ve read Harold Bloom’s and Mark Van Doren’s take on the meanings of the plays. I’ve written my own analysis of the plays for school. But I’d never considered so thoroughly how an actor determines meaning from Shakespeare’s plays and how an actor actually acts Shakespeare so many hundreds of years after he wrote the words to be performed.

In fact, reading Shakespeare on Toast has caused me to rethink how I read Shakespeare. I have been downloading the free Project Gutenberg versions of the plays, but I see now that those are not necessarily the most accurate versions. Besides, the way a play is laid out on the page makes a different in meaning and presentation. The ways Shakespeare plays with iambic pentameter are essential to understanding as well. I am all the more determined to watch the plays now!

I found Shakespeare on Toast incredibly accessible. Although as an adult I am probably not the intended audience, I believe anyone could be tempted to read Shakespeare after reading Mr Crystal’s book. He really does bring Shakespeare back down to earth: his plays were the “soap operas” of his day.

If there is one annoyance, it is that I felt that occasionally the author tried a little too hard to reach the modern generation.  He spoke a little bit too much about the modern soap operas (I admit I was lost as I know nothing about popular television, let alone soap opera television), but maybe that will help him get on the same level as the young adults. Unless, of course, the young adults likewise have never seen those particular television shows.

I read this as a part of my personal Begin with the Bard reading challenge. 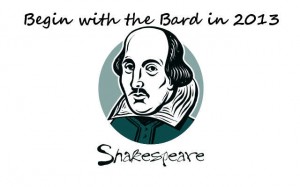