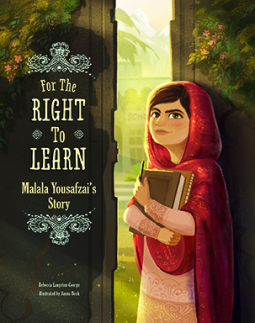 For the Right to Learn by Rebecca Langston-George (Capstone, September 2015) is a picture book biography of Malala Yousafzai, giving younger readers a background of just what she was able to accomplish. I’ve said before that her story is inspiring, and I think this book did a great job of also making it accessible to young kids.

This picture book is for middle and upper elementary children both because the text is dense on each page (4-7 sentences on each two-page spread) but also because the concepts of discrimination and violence against girls who want to go to school is such a deep concept for the very young to grasp. The vibrant digital illustrations, however, give added dimension to concept Malala faced. Children may be fascinated with the difficulties around the globe for children like themselves. With the combination of the vibrant illustrations (some of them featuring Pakistani writing) and the intriguing story, children will keep reading!

I asked my son, age 7 and soon-to-be a 3rd grader, what he thought of the book. He was impressed that she was still a child doing the things she did, although when he saw her photo in the back of the book he said, “Well, she looks like a grown up though!”

How often do we take our chance to get an education for granted?

Note: I received a digital copy of this book for review consideration. It will be published in September of this year.

Bhutto’s autobiography, Daughter of Destiny (published in 1988 as Daughter of the East), tells a completely unique story. Bhutto was the first woman prime minister of a Muslim country (Pakistan), and she first went through years of struggle, including years of solitary confinement, before she could be an example of democracy.

Much of her autobiography was written prior to 1988, before she was elected prime minister. She says she wrote it “to set down the record of the brutal Martial Law regime of General Zia ul-Haq” (page 374). The remainder of her book shares how she was briefly allowed to serve the country and restore some democratic freedoms before a dictatorship again gained control of the country.

Despite all the drama with which Bhutto wrote, for much of the time I was reading, I fundamentally didn’t understand the import of resisting the regime. From my couch in the USA, it seemed to be an unnecessary, violent political struggle. Then I read a letter Bhutto received from a political prisoner:

I prefer to be hanged than live under the oppressor. To give in is not our principle. We are not ready to call a donkey a horse, or black or white, out of fear of Martial Law. (page 276)

I finally understood a little bit what it meant to live under a dictator: it meant denying what you know to be true because you’re threatened.

That type of understanding is why I read about the histories of other cultures. I feel I cannot relate at all: I live in a peaceful country and have my entire life. Bhutto’s story is one of a country that had been (relatively) peaceful her entire life (for she was born into an independent Pakistan), until a military dictator took over the democratically elected government and established military rule.

Benazir Bhutto shares her passion for Pakistan, the people of Pakistan, and democracy in her autobiography. I only wish it were better told: Daughter of Destiny had serious flaws that made it a frustrating read. END_OF_DOCUMENT_TOKEN_TO_BE_REPLACED

I can finally recommend something related to the Three Cups of Tea story.

Remember how I hated listening to the audiobook of Three Cups of Tea, which felt like a journalistic report despite being called a memoir? My mother loved Three Cups of Tea and thought it was wonderful, so I enlisted her help in writing my post for Rebecca Reads: I shared a Counterpoint post, with each of us writing our thoughts of the book.

Long story short: The issue of my “hating” Three Cups of Tea was revived last week by someone who wasn’t so happy with my very scathing review. Hate, apparently, is too strong a word, considering Greg Mortenson is in the running for the Nobel Peace Prize. (FYI, apparently more than 100 people are nominated each year.) Despite that, I still thought that the character described in the book is not a likeable person: he’s a bit too flighty for me to trust with my money. Besides, the book dragged along with horribly unnecessary details. I had to reiterate to my visitor that I have no intention of rereading Three Cups of Tea, but if the story were completely rewritten I may revisit the issue. (I said, “If Greg’s story is rewritten by a different author in a completely revamped structure, I may consider revisiting it.”)

Well, it has been rewritten. Twice. END_OF_DOCUMENT_TOKEN_TO_BE_REPLACED

I disliked Three Cups of Tea; my mother loved it. Read our counterpoints. END_OF_DOCUMENT_TOKEN_TO_BE_REPLACED