You are here: Home / Reviews / Fiction / The Posthumous Papers of the Pickwick Club by Charles Dickens

After I finished reading The Pickwick Papers by Charles Dickens (first published serially in 1836-7), I began to read the introduction to my edition1. Almost immediately, it confirmed what I’d thought as I’d read it: that Mr. Pickwick is a Don Quixote and Bertie Wooster character. So I stopped reading the introduction; I’ll tell you what I think and then go back and read it.

Last year, I read Three Men in a Boat by Jerome K. Jerome (thoughts here) and thought it un-Victorian in its humor and ridiculousness. I see now that it is just one of many books in a comedic, romantic tradition, harkening back to Cervantes’ Don Quixote but also to the more recent Charles Dickens’ Victorian tale of adventure, The Pickwick Papers.

Although The Posthumous Papers of the Pickwick Club is a long, sometimes laborious novel to read, it is series of vignettes about life among both the well-to-do and the poor in the early nineteenth century London. Before anything else, it is a character book. The characters are wonderfully drawn, and I found myself well engaged in their story by the end of the book. I wanted to know their fates. As for their adventures, I frequently laughed out loud at the jokes, ridiculous situations, and amusing happens. Dickens obviously loved these invented friends of his, and his joy at writing about them made the book a fun romp.

Like Don Quixote, Mr. Pickwick desires adventures. He is advancing in age (he is in his 50s) and wants to seek more experience by heading away from his comfortable London. He’s the president of the Pickwick Club, so he has the right to declare a special “branch” of the Club that will leave in search of adventures. His reasons are thus:

[W]hile this Association is deeply sensible of the advantages which must accrue to the cause of science … they cannot but entertain a lively sense of the inestimable benefits which must inevitably result from carrying the speculations of that learned man [i.e., Mr. Pickwick] into a wider field, from extending his travels, and consequently enlarging his sphere of observation, to the advancement of knowledge, and the diffusion of learning. 2

Taking three younger club members with him (Mr. Winkle, a sporting man; Mr. Snodgrass, a poet who has never written anything; and Mr. Tubman, a ladies’ man), Mr. Pickwick begins an adventure among the people of the London suburbs and surrounding areas. Soon, he finds a wonderful servant, Sam Weller, and this memorable group becomes whole, for Mr. Pickwick’s adventures did not seem solid until he had the faithful Mr. Weller by his side.

As in Don Quixote, Mr. Pickwick had a sidekick, and they sought for romantic adventures. However, the adventures and the men themselves in Pickwick were quite unlike those in Don Quixote. Mr. Pickwick was not insane or unnaturally odd, and the adventures revolved around the basic, amusing things that happen to Victorian persons every day, from losing a hat in the street to watching a political battle unfold in a small town. Mr. Dickens does add a degree of exaggeration to everything, though, that adds to the novel.

My favorite adventures revolved around Mr. Winkle. He was just so funny to me! I loved his duel in the early chapters of the novel. In fact, it was not until the duel that I felt I enjoyed the book. The beginning of the story felt convoluted; it took me 50 pages to get the feel for the writing style, the characters, and the humor.3

I also loved Mr. Pickwick and Sam Weller’s relationship. It hearkened back to the Don Quixote-Sancho relationship, as Sam was quite devoted to Mr. Pickwick. But this was not a subservient friendship: they understood each other, and Mr. Pickwick was likewise doting on Sam.

Another favorite part of the book for me was the series in Fleet debtor’s prison. I don’t want to reveal spoilers about this section of the book. Suffice it to say, I reflected on the result of Dickens’ writings (as I wrote about the other day) as I read. I am not surprised that Dickens’ writings made a difference4, but I was surprised with the amount of humor as he was describing such a horrible place. It’s is fascinating that Dickens could appeal to our humanitarian side subconsciously, even as he brought a smile to our faces.

I read Pickwick quite quickly in hopes of being ready for my Classics Circuit post today. This is probably not the best way to read it. I’m certain I missed lots of the subtle humor in the novel. It is very long. As it was, I did enjoy what I read, although at times it did feel like a lot of work. I’ll have to plan on reading my next Dickens novel more slowly, so I can savor the enjoyable characters, the distinctive settings, and the laugh-out-loud moments. 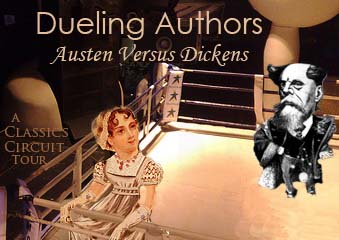