Flatland by Edwin A. Abbott 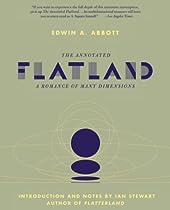 In Edwin A. Abbott’s novella Flatland, A Square explains to the three-dimensional world how he lives in Flatland, his world of two dimensions. When a sphere visits his world, his familiar, customary world is upset.

Although I had read Flatland a decade ago, I recalled none of the details and greatly enjoyed reading it again. It was an intriguing look at a world where geometry directly impacted daily life; it expanded my conceptions of dimension in my own three-dimensional world. What would a fourth dimension be like? I cannot comprehend.

As the Introduction instructed me, much of Flatland was a social commentary on Victorian England: it is a satire. I defined satire a few weeks ago, and yet I somehow missed it in this book. I just kept thinking “How dare he suggest that women are just straight lines?!” Duh! He’s pointing out the flaws of his current society by creating a ridiculous society. If you are interested in Victorian England, his commentaries are quite interesting; for me, the introduction and accompanying notes helped me make sense of some of it. For that reason, I recommend reading a version with notes or an extended introduction to help clarify Abbott’s purposes.

The first portion of Flatland seemed slow to me: Square was telling about his society and explaining the history of his two-dimensional land. The second half of the story was much more interesting, for a sphere visited him. How does a sphere prove a third dimension to a person living only in the second dimension?

In the end, however, Flatland was a fascinating look at how I am limited in my understanding because I am only three-dimensional. I also am close-minded because of those limits.

Who What When Where Why

Who? A Square, his pentagon sons, his straight line wife, his triangle servants, and a sphere

What? A Square in Flatland learns of the third dimension by being introduced to Pointland (no dimensions), Lineland (two dimensions), and ultimately Spaceland (three dimensions)

Where? In his hall and in Spaceland

Why? Because once every 1000 years, a Sphere from Spaceland can appear to a being in Flatland to expound the Doctrine of the Third Dimension

Have you read Flatland? Did you realize it was a satire of Victorian England? What did you think of it?

If you have reviewed Flatland on your site, leave a link in the comments and I’ll add it here.