My mother-in-law got word (and spread it) that I would love for my son to get books for his birthday, and I, of course, got him a couple books (among other things), so he had a rather bookish birthday this year. (Are you surprised?)

I consider books that he owns to be bonuses for me, since I have to read them every night. I’m glad I really like them all! 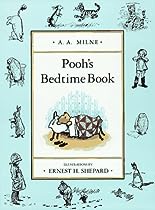 First, I found two books for my son at the bargain shelf at the library the other week. One was Pooh’s Bedtime Book, which has a few poems and a few chapters excerpted from the Pooh novels, of course illustrated with Shepard’s pictures. Since I don’t let my son touch our nice hard copy of those books, this one is for him to love until it falls apart.

I also found a used but still in fairly nice shape board book with pop-ups: My First Jumbo Book of Things that Go, published by Scholastic. Again, because it was inexpensive and used, it may fall apart, but he loves it. The day I bought it, he sat and played with it for 10 minutes; then I took it and wrapped until his birthday celebration. I was also looking for a used but nice condition copy of Richard Scarry’s Cars and Trucks and Things that Go. When I find it, I’ll get it for him as well!

My favorite book that he got is, hands down, The Little Engine That Could by Watty Piper, illustrated by Loren Long. It is not the original illustrations, and I’m a sucker for originals, so at first I was wary: spin offs just usually aren’t as good. My sister-in-law said, “I looked for the other and couldn’t find it, but this one is pretty too!”

In fact, the illustrations are so gorgeous, I love them more than the original ones. It’s a large-sized hardcover book with bright illustrations and lots of white space. I’ve heard people complain that The Little Engine that Could could use more white space: it has way too many words! Well, this “remake” has so many pictures and nice spacing that I don’t mind reading it! My son likes to look for the trains on each page. Further, I don’t mind rereading it to find details in the gorgeous paintings on each page. It is truly a work of art. I love the landscapes!

Those same cousins also gave my son The Little Red Caboose, a favorite Little Golden Book. Now I realize why it was I always looked for the caboose of trains! I think it was a subconscious part of my childhood, because I don’t remember reading this book as a child. There is enough in the illustrations to allow me to read it five times a night without losing my mind. (On the first read through, I read the words. On the second, I read a few words and point to pictures. On the third, I point to pictures. After that, I don’t read it: my son does. I think three is my limit.)

Speaking of Little Golden Books, my mother-in-law also got my son Baby Animals. I admit, this one has kind of scary animals (their eyes all look a little vampire-ish). But she insists that my husband loved it as a child, so I’m willing to give it a try. I’m hoping my son learns his animals because I want to take him to the zoo!

Big Dog, Little Dog by P.D. Eastman is one that my husband loved as a child, so now it’s on the shelf of the next generation too. It covers all sorts of opposites: Fred and Ted are friends, but one is tall and the other short; one wears red, the other green; one plays flute and the other tuba. It’s a cute story, although my son hasn’t requested it reputedly yet. (There are no trains in it.)

And then there are the “big” books. Some cousins gave my son My Big Truck Book and My Big Animal Book which my son simply loves. It is an extra large board book and it has  pictures of actual trucks/animals! About 8-10 trucks or animals per page! He loves it, especially the truck one, and seriously squeals his excitement about the school bus and the car transporter (his truck favorites) and the puppies and the ducks (his animal favorites). This is just feeding his addiction to riding in the car: “Bus! Truck! Car!” is the running commentary from the back seat.

And that’s it for now! What books does/did your two-year-old read?

What are you reading with your kids this week?

Were any of these favorites of your when you were a kid?