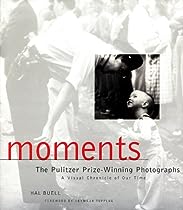 Some moments were not historically significant. For example, the winning photograph  of 1954 by Mrs. Walter M. Schau, an amateur, was of a rescue from the cab of a truck that was dangling over a bridge, and the 1958 photograph was of a policeman bending over to talk to a young boy during a parade. Other photographs are memorable – such as the 1945 winner by Joe Rosenthal of the flag raising at Iwo Jima and the chilling photographs of the Oklahoma City bombing (1996 spot news photography winner) . The book as a whole showed the changing focus of the world, as the 1960s and 1970s winners tended toward chilling Vietnam photographs and the 1990s and more recent photographs tended toward those suffering in Africa. Some years featured political photographs (such as the Monica Lewinsky scandal) and others featured domestic issues, from the impact of school bussing (1976 feature winner) to children of drug abusers (1998 feature winner).

Moments, therefore, is at both times delightful and frightening to browse through. While it captures an amazing number of “moments” through history, some are horrendously shocking. For that reason, I’m glad it’s not a coffee table book I’ll keep around my home. At the same time, I found both the stories and the photographs fascinating.

Partial or full portfolios of photography are on the website post 1995; however, if you are sincerely interested in the photographs and the stories behind them, you may want to find Moments. It’s quite worth a perusal. The copy of Moments I read only provided the winners through 1999; a new edition has been released with the subsequent decade.

Do you have a favorite Pulitzer Prize-winning photograph? What types of “moments” do you like to remember in photography?

If you have reviewed Moments on your site, leave a link in the comments and I’ll add it here.