OCDaniel by Wesley King is a much needed added addition to Young Adult collections, as it puts a frequently taboo subject (mental illness) at the center of the story. OCDaniel is about a middle school boy suffering from Obsessive Compulsive Disorder, but he does not quite know what it is. He feels progressively frustrated with his strange obsessions and his inability to let go of things he knows are not reasonable. Enter a strange girl from his school who has her own mental disorders that make daily life miserable. She needs help, and since she recognizes Daniel’s issue, she believes he is one that is able to help him. Together, Daniel learns a little bit what a true friend looks like, and he is able to come to a recognition of the fact that he needs help in overcoming his unique condition. END_OF_DOCUMENT_TOKEN_TO_BE_REPLACED 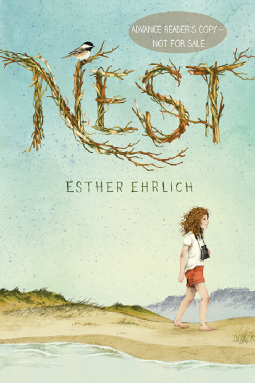 Nest by Esther Ehrlich (Random House Children’s Books; published today!) is an emotionally charged novel about a young girl facing stark change after her mother develops a serious disease. Naomi, “Chirp” to her family and friends, is a bird-loving sixth grader on Cape Cod in the early 1970s. Her life is full of nature and her loving family. As her family struggles with her mother’s degenerative condition, she must grow up faster than she intended.  END_OF_DOCUMENT_TOKEN_TO_BE_REPLACED

At my classics book club last night, one of the women had not had a chance to read The Heart is a Lonely Hunter by Carson McCullers (published 1940), but she came to hear the discussion about it nonetheless. She was not familiar with the book, and as we discussed it, she commented on how strange it all sounded.

“It sounds like it’s about a bunch of misfits that no one listens to,” she said.

We all concurred. And yet, such a summary does not do justice to the complexities that 23-year-old Carson McCullers captured in her debut novel, a small snapshot of life in a small Southern town in the Great Depression era.

“Snapshot” is the wrong word, however. McCullers herself was a musician (passing up her acceptance to Julliard for lack of money) and she dubbed her novel a “fugue.”

“Like a voice in a fugue, each one of the main characters is an entity in himself – but his personality takes on a new richness when contrasted and woven in with the other characters in the book.” (Quoted on the Houghton Mifflin Harcourt study guide)

Such is the set up of the book: four lonely people in a small town turn to the only man who seems to care about them, the deaf and mute John Singer. Ironically, this deaf-mute is the only one who “listens” to their concerns and stories. He can read lips, and he is able to speak (he was trained as a child) yet simply chooses not to respond in the conversations he has with the “lonely hunters” who visit him. He responds simply with a smile and a nod. Each chapter focuses on one of the “lonely hunters,” alternating among all of them, including the deaf-mute, who, despite his appearance as a confessor and friend for the others, is in actually the loneliest of them all.

END_OF_DOCUMENT_TOKEN_TO_BE_REPLACED

I don’t often have the urge to seek out a young adult novel, but this month has been one of them. I’m pleased to say that I really enjoyed the two I chose. After deals with a teenage mother, and An Abundance of Katherines deals with a genius teenager dealing with yet another break up. Both novels felt original, and gave me, as an adult, a sense of satisfaction as I read them. After was by far the more emotional, and Katherines was most amusing. END_OF_DOCUMENT_TOKEN_TO_BE_REPLACED