You are here: Home / Reviews / Nonfiction / The Words We Live By: Your Annotated Guide to the U.S. Constitution by Linda Monk 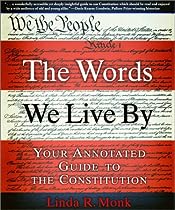 The Words We Live By: Your Annotated Guide to the Constitution by Linda Monk is simply brilliant. Monk takes the Constitution of the United States, including its amendments, and dissects it line by line, explaining the historical significance and the modern significance of the wording. She does so in layman’s terms, with amusing quotes in the margin, case studies in shaded boxes, and photos and illustrations. It is easy to read, and easily accessible.

Beyond the appealing format of this book, however, is the content. Reading the constitution with Monk’s gloss helped me to comprehend just why the U.S. Constitution has withstood more than 200 years and a Civil War: the constitution is a document that adapts to the changing times, both through the process of amendment and through the significant process of judicial interpretation of legislation.

Certainly, The Words We Live By is not comprehensive. But what it lacks in expanse it makes up in readability and interest, at least to me. I seriously enjoyed this book and would recommend it to anyone interested in understanding U.S. rights and government.

The most interesting section, at least to me, was the thirty pages discussing the first amendment, and the ways in which it has been interpreted. Most amendments garnered about 5 pages of interpretation, but the first amendment has been quite significant! I also enjoyed the history given during the discussion of the sections of the Constitution, as the history detailed why certain aspects of the government were designed as they were. And did you know that the Twenty-seventh Amendment was one of the original 12 amendments submitted in 1789? It was added to the constitution in 1992 after the required percentage of states ratified it, ultimately because of a college student’s campaign for it.

At any rate, I hope to revisit this book in a few years when I again feel shaky on what makes the constitution what it is. I certainly hope that Linda Monk updates it with a new edition in the future. (It was originally published in 2002, so I wonder what new verdicts may have changed things since then.)

For those in the United States, Happy Independence Day tomorrow!

This book counted for the 300s century for the Dewey Decimal Challenge.

If you have reviewed The Words We Live By on your site, leave a link in the comments and I’ll add it here.