You are here: Home / Reviews / Nonfiction / Biography/Memoir / Jane Austen: A Biography by Carol Shields, a Quote Book, and a History of England

I’ve have been itching to read Jane Austen lately, and although I’ve decided to read Sense and Sensibility for Valentine’s Day, I found a few things that could satisfy my craving right now! A movie or two also may help in the coming weeks.

I loved Carol Shields’ biography of Jane Austen! The narrator for the audiobook had a lovely Austen-esque British accent, which gave it a great sense of place. Then Shields began by admitting that she’s an “amateur Jane Austen fan” who goes to the Jane Austen Society of North America meetings because she loves Austen so much. That made me think of her as a kindred spirit.

While I haven’t read many Austen novels (yet), I loved Shields’ emphasis on the fact that we can learn from and compare Jane Austen’s own life to the setting, characters, and situations in her novels.

It was very short (about 5 ½ hours, the equivalent of 180 pages) and yet I feel I have a greater understanding of the remarkable woman who wrote some delightful romances.

Some random facts about Jane Austen (and long-time Austen fans probably already know all of these things): 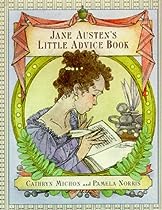 Then I turned to a short little quote book that jumped out at me while I was at the library one day. The editors of this quote book admit feeling a little guilty to earning money on this book, since Jane Austen herself never earned more than £700 in her lifetime. Yet, it’s rather cute and it was fun to read over the course of an hour.

Using only Jane’s own words, including letters, her unpublished works, and her published novels, the editors give us Austen’s “advice” on Men and Women, Love and Marriage, Family, Worldy Things, The Human Condition, Social Life, The Literary Life, Odd Topics, and Jane Predicts the Future. They readily admit that they take quotes out of context, and I must say that the editors’ comments on each quote are the most amusing parts. From those chapters, I must say my favorite part was the “predicts the future” section, with such quotes as these.

On Predicting the Success of the TV Series E.R.

A sick chamber may often furnish the worth of volumes. (from Persuasion)

On Not Worrying About the Ozone Layer

What fine weather this is… at least everybody fancies so, and imagination is everything. (from the letters of Jane Austen)

There are 125 pages worth of fun quotes, and reading through them got me even more excited to read Sense and Sensibility (as well as the other novels) in the future.

Two Histories of England by Jane Austen and Charles Dickens

Jane Austen’s The History of England and A Child’s History of England by Charles Dickens are a bit harder for me to write about because, um, I know nothing about the history of England. Therefore, I missed the delightful jibes and jokes that Austen wrote and, while I understood Dickens had an interesting bias and judgment of history, it did not make sense to me in a historical way as the writer of the introduction indicated it would.

Jane Austen wrote her short manuscript for her sister when she was 16, and it was clearly a parody of history books. From my perspective, it certainly was amusing. For example:

“Edward the 5th: This unfortunate prince lived so little a while that nobody had time to draw his picture.” (page 5)

Her snide remarks about various kings and queens really went over my head, since, as I mention, I know little about England’s history. I can only assume her frequent and over-the-top defense of the Stuarts was more sarcasm.

Charles Dickens’ A Child’s History of England is also sarcastic and judgmental. He refers to King James the First as “His Sowship” because that’s what James’ favorite helper called him and Dickens “cannot do better than call his majesty what his favourite called him” (page 72). The disdain is just dripping throughout the descriptions of the king’s reign.

But Dickens’ history (which is much longer, and apparently is only an excerpt from the whole) is packed full of all sorts of extraneous details that make it fascinating and fun. I loved learning about the Gunpowder Plot through Dickens’ imaginative story!

To me, the most amusing thing about Dickens’ account  is that, according to the introduction, it was actually a part of the school curricula for British school children “well into the 20th century” (introduction, page ix). My question is: was it used as a history text or rather as a humourous part of British culture? As I read, I kept laughing at the thought of this being a proper history textbook. There were so many descriptive beheadings!

I first saw this on Heather J.’s blog and I had to get it!

Have any people from England read Austen’s or Dickens’ histories? I’m curious as to the “accuracy” and/or the impact of the humor on those that actually are familiar with the history of England.

Which Austen novels are your favorites? I’ve still only read Pride and Prejudice and Northanger Abbey. (But I’ve seen all the movies!)