Today, I’m using the opportunity of not having any other reviews written to share thoughts on kid’s books I reviewed a long time ago and never posted. Some of these are ones my son loved; others he was too young for at the time we read them and we will probably visit them again in the future.

Cinderella, or, The Little Glass Slipper by Marcia Brown (Caldecott Winner 1955) has crayon, watercolor, and ink with appropriately gentle pictures for the story of a little Cinderella, who pines after the ball. At first glance (the cover) I wasn’t sure about the illustrations, but once I opened the book and saw the coloring of the ink sketches, I was hooked. I really like how the characters are outlined in ink and then the crayon (or colored pencil) brings out the details. I also like the telling of Cinderella: just right for a young child wanting to read of princesses. (Raisin has not shown an interest to this point in princesses unless they are on trains, but we may revisit this again since he does enjoy fairy tales.)

The Ugly Duckling illustrated by Jerry Pinkney, with Hans Christian Andersen’s text adapted by Jerry Pinkney (Caldecott Honor 2000), is another picture book with sprawling, all-encompassing detailed watercolors. The illustrations do the traditional, familiar story justice. Pinkney does an incredible job of getting in to detailed “close-ups” of the scenes. From the birth of the ducklings (focusing on their eyes and feathers) to the dog panting beside the lonely duckling and the swam showing off at the end, Pinkney captures emotion in the animals. The dim colors and apparently textured illustrations make the snowy, cold winter seem real. My only worry is that with so much texture and detail, it may be difficult for a young child sitting on my lap to focus on any part of the large picture. Overall, it is beautiful; I think I appreciate it more than a child would.

Puss in Boots, illustrated by Fred Marcellino and with text translated from Charles Perrault by Malcolm Arthur (Caldecott Honor 1991) has gorgeous pictures. I don’t know enough about art to tell you what kind of illustrations they are (colored pencil? paint?) but each picture does have a texture to it that gives it a sophisticated feel. The story is the traditional story of Puss in Boots, but the artwork makes this into something special. Just look at that cover!

Rapunzel by Paul O. Zelinsky is absolutely beautiful and much deserving of the 1998 Caldecott Award. Zelinsky explains in the note at the end that he was trying to imitate the Renaissance style of art because that is what he thought of when he recalled the story of a girl in a tower. The story is a retelling of the brothers Grimm, and was highly appropriate for children. I highly recommend this book. There is lots of text on each page. Three-year-old Raisin still struggles to sit still (he wanted to read the story of Rapunzel as told by Disney’s Tangled, I think) but for the older child who loves the story, this is wonderful edition.

Rumpelstiltskin by Paul O. Zelinsky (Caldecott Honor 1987) is likewise beautiful and is also a retelling of various versions of the Grimm’s story. I liked the tenderness in the expression of the mother and baby and the golden room was gorgeous. Rumpelstiltskin himself was exotic and strange and highly appropriate for the story at hand. I have good memories of this version from when I was younger and I still like it today.

Snow-White and the Seven Dwarfs illustrated by Nancy Ekholm Burkert, with text translated by Randall Jarrell (Caldecott Honor 1972) , is a retelling from the Brothers Grimm. I did not like this book, either the translation or the illustrations. I personally think the Brother’s Grimm stories are not quite right for picture books – without some editing. Randall Jarrell included all the details, from the step mother eating the lung of what she thought was her step daughter to the fact that a seven-year-old girl was caring for seven dwarfs and then enchanting a young prince. The illustrations are infrequent and the text heavy (there is a two-page spread of text and then a two-page spread of illustration), and as ink or pencil drawings, I think they were rather ugly. The illustrations were given the Caldecott Honor, but I have no idea why. I don’t like looking at them, and I have a hard time believing that Snow-White is the fairest in the kingdom. Also, she is supposed to be seven years old in some of the pictures, but she looks much older. All that said, I should note that many on Amazon and elsewhere praise the beauty of the illustrations and the value of sticking to the original translation: I’m obviously in the minority finding this horrific.

Snow White and the Seven Dwarfs as translated and illustrated by Wanda Gág is a better illustrated version. Again, it is rather text heavy, and the story is morbidly close to the Brother’s Grimm’s account with the witch eating the boar’s heart. But in this version, the black-and-white line drawings (it was published first in 1938) have a Candy-Land feel to them. While Snow White still isn’t convincing as either a seven-year-old or the “fairest in the land,” at least the pictures are child-like and appropriate. I’d recommend this version, which was awarded the Caldecott Honor in the 1930s.

Chanticleer and the Fox by Barbara Cooney takes its story from Chaucer’s Canterbury Tales. It is the story of the rooster named Chanticleer who let himself be flattered by a cunning fox. He is saved in the end, but the reader learns the lesson. There are few things about it that don’t sit well for me in a children’s book: such as the rooster’s “seven wives” and Chanticleer has a nightmare that comes true. But in the end, I liked how a classic story (which I admit I have not yet read in the original) could be retold for children. Cooney’s illustrations are simple (some pages are black and red, and others featuring bright gold, red, green, and blue illustrations) and well deserving of the 1959 Caldecott Award.

The 1985 Caldecott winner shares a retelling by Margaret Hodges of a story from Edmund Spencer’s Faerie Queen, Saint George and the Dragon, illustrated by Trina Schart Hyman. I’m not familiar with the original story, but this retelling is full of adventure as the brave knight faces the dragon day after day until it is killed. Hodges tells the story with somewhat of an archaic feel, and yet it seems appropriate. The illustrations are likewise rather traditional; the illustrator even calls her style “old-fashioned.” Overall, the illustrations matched the text and I only wish there were more illustrations and therefore less text on each page; some pages were quite dense with text.

The Graphic Alphabet by David E. Pelletier (Caldecott Honor 1997) illustrates the letters doing various things, all with graphic design. This is not your normal alphabet book of “a is for apple”! The “A” illustrates an avalanche, the “B” is illustrates a “bounce”, and so forth. I think it is a clever alphabet book for other children able to discern the meanings of the images. My son (at age 20 months) wasn’t interested in the pictures at all, but I suspect now (he’s three) he’ll really enjoy the letters: he loves letters right now.

Tasha Tudor’s illustrated Mother Goose is gentle and adorable. The children she illustrates are all rather cherubic. At the same time, there was a dated feel to her collection of nursery rhymes. That may be because some of her rhymes are unfamiliar, but the pictures were not as bright and engaging as other collections. In fact, every other page is a black and white illustration. That wouldn’t be a problem in and of itself, but the illustrations and the layout is rather boring overall. In the end, it’s not a favorite book for me to read, although the illustrations are well done and probably deserving of the Caldecott honor it was given in 1944.

Tomie De Paola’s Mother Goose is not a Caldecott winner, but I found some thoughts on it so I thought I’d include it here. I like how Tomie De Paola has included the lyrics for lullabies along with nursery rhymes in his classically illustrated Mother Goose book. There are often many short rhymes per page, and because there is no structural organization, it is somewhat confusing: I wished for thematic structure. But I like his illustrations and selected nursery rhymes.

Olivia! by Ian Falconer (Caldecott Medal 2001) is another book that perfectly captures the nature of being a child: everything is fun and drama to the little pig Olivia. I like the touch of color given to the charcoal drawings, and I think little children would relate to this little child-like animal. Raisin and I have found some Olivia books in the past; we need to pick it up again.

Finally, the illustrations to Abraham Lincoln by Ingri and Edgar Parin d’Aulaire are quaint color pencil, which matches the folktale-like subject matter. They don’t wow me as other Caldecott winners do, but as the 1940 Medal Winner, I think the art is sufficiently award-worthy.  Abraham Lincoln reads like a novel; it was easy to approach and would welcome even younger children into the fun traditional stories about our 16th president. However, I did have two disappointments. First, there is no afterward clarifying which of the stories are suppositions and which are known facts. I suspect most of the details are not actually known. Second, the story does not share the account of Lincoln’s death; it ends with “The Civil War had come to the end. …”, with some descriptions of how the people cheered him. This gave it an unbalanced feel and the “fairy tale” of Lincoln’s life feels completely false. In the end, I enjoyed reading Abraham Lincoln, but I certainly hope there are more useful biographies about him.

Which of these books have you and/or your kids read and enjoyed? 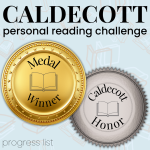 The Goldilocks Project: The Traditional Story

Abraham Lincoln: A Man of Faith and Courage by Joe Wheeler 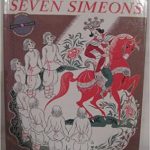 Seven Simeons: A Russian Tale by Boris Artzybasheff
Reviewed on January 14, 2011
Previous
Next