We’ve discovered some marvelous finds in the last few weeks. All of them happen to be relatively new books, which was not my intention: but they’ve certainly stood out.

Chicken Chicken Duck by Nadia Krilanovich. In a simple rhythm and using bright and realistic paintings of animals, Nadia Krilanovich introduces animal and their sounds to the young reader. The animals are all stacked on top of each other in silly ways, and they are also painted on a plain white background, which is just perfect for this simple words book. White space gives the realistic paintings plenty of breathing space. Each series of animals ends with a loud QUACK, a favorite sound for a toddler and preschooler to make in a really loud voice. Raisin and I read this over and over and OVER again the first day. He loves being able to “read” it himself, the rhythm is fun, and the “Quacks” are the best. The only compliant is it’s too short: just one more page illustrating a big animal mess would have been lots of fun. As it was, it’s certainly one to remain in the frequent reading rotation for the foreseeable future. (Published by Tricycle Press, March 2011. I read a library copy.)

If Rocks Could Sing by Leslie McGuirk. . Leslie McGuirk’s “discovered alphabet” gives life to rocks by discovering everything from birds and dogs to kick and nose in the rocks themselves. Although Raisin loves alphabet books, I must admit that I usually find them rather tiresome and redundant. Lesli McGuirk’s alphabet is anything but boring. Starting with A is for “Addition” and going to Z for “Zero,” I loved discovering letters and characters in the most inanimate object: rocks. Her title is apt, for her rocks sing with creativity. It may even have inspired Raisin and I to look for our own creative collection of discovered items. My favorite pages is C is for “couch potato” complete with a potato-shaped rock lounging on a couch. Perfect! (Published by Tricycle Press, May 2011. I read a library copy.)

I Want My Hat Back by Jon Klassen. A bear looks for his hat, asking his animal friends if they’ve seen it. Then he remembers where he saw it. Did the young reader see it too? Raisin loves this book mostly because he can read it himself – and he really does read it! Each page has two sentences, and the print is large with plenty of white space. Because it does not look intimidating, Raisin gave it a try and was delighted that he could read all of the first pages. (“My hat is gone. I want it back.”) Then the repeated question on each page (“Have you seen my hat?”) and varied answers (all meaning the same thing) made it a great reading start for Raisin. I think it’s a perfect early reading book, but it’s also a fun read aloud picture book. I should note that the end is a little grisly but it still works for kids: Raisin, at age 3½ didn’t quite get it, and I think older kids would find it quite funny. Some day he’ll get the joke. I’ll know when he starts laughing on that last page. The down side is you have to wait a few months before you can read it yourself, since it won’t be published until September! (Published by Candlewick Press, September 27, 2011. I received this as a review copy at BEA.)

Me…Jane by Patrick McDonnell. I must admit that I am not very familiar with the life of Jane Goodall, who is an expert on chimpanzees and anthropology, and proponent of environmental and social issues. Raisin certainly had never heard of Jane before. But none of that mattered in reading the simple picture book that tells her story. As a young child, Jane loved nature. She carried a stuffed chimpanzee everywhere, and dreamed of changing the world. (Raisin looked for Jubilee the stuffed monkey it in every picture.)  I loved the end, how it showed that her dream came true, and Raisin and I talked about dreams coming true, and what we can do “when we grow up” and now. Raisin is in a stage where every day he decides what he wants to be when he grows up. (This week it ranged from “barbarian” by which he meant librarian, to astronaut, to pilot.) It was nice to talk about how young Jane’s dream came true. As an adult, I am inspired. As a child, Raisin enjoyed Jane’s story and Patrick McDonnell’s illustrations. That makes a great nonfiction picture book. (Published by Little, Brown Books for Young Readers, April 2011. I read a library copy.)

I talked to Raisin about these books. I had the hardest time getting him to say “My name is Raisin.” He kept saying, “no, my name is ____.” And then I couldn’t get him to stop Quacking. I think this is a rather cute discussion because of that.

Have you found any of these books yet? Which sounds most interesting to you? 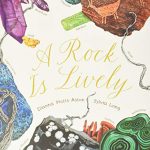 A Rock is Lively by Dianna Hutts Aston