The Jungle Book(s) by Rudyard Kipling 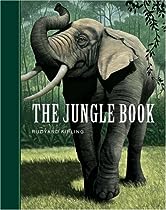 The Jungle Book and The Second Jungle Book by Rudyard Kipling contain much more than the story of the adopted wolf-boy, Mowgli, who is probably the most familiar of Kipling’s characters.

Kipling’s Jungle Books are collections of stories about animals and people from around the world. Each story seems to be rooted in traditional facts about the animals and/or traditions, so they make for an interesting read. Some stories have fantastic, speaking animals; others are about people and superstition. Some stories take place in the Indian Jungle; others are in Eskimo North America or the deep seas of the Atlantic Ocean. As with his Just So Stories, Kipling has interspersed a poem or two before or after each story.

I was not as impressed with these stories by the Nobel Prize-winning author as I was with his Just So Stories. While they were interesting, they were not as creative nor as well-written as the Just So Stories, which were written ten years after these. Many of the non-Mowgli stories especially were slow to develop and involved lots of dull discussion or description. One exceptional non-Mowgli story was Rikki-Tikki-Tavi, which is about a mongoose that saves a boy’s life. I did find it fun and I will look for a nicely illustrated version for my son.

I did like the Mowgli stories, and wish those were in a separate volume, in a more chronological, novel-like format from the other, more mediocre stories. Mowgli and his animal friends (Baloo the bear, Kaa the serpent, Bagheera the panther, Hathi the elephant, and others) reminded me slightly of Winnie-the-Pooh and friends. When Mowgli left the Jungle the last time at age 17 to live in a village with the other humans, his good-byes made me sad, just as saying good-bye to Winnie-the-Pooh made me sad.

However, in contrast to A.A. Milne’s Hundred Acre Wood, Kipling’s jungle is quite violent. Also, while in Winnie-the-Pooh Christopher Robin was saying good-bye to his imaginary animal friends, in Mowgli’s tales, Mowgli is giving up a “real” life of hunting and killing in the jungle for a more “normal” human life. In Mowgli’s stories, Mowgli hunts, the tiger Shere Khan tries to kill and eat him, the human villagers try to stone him to death, and Mowgli encourages the jungle animals to overrun a town, killing a few villagers in the process. The Mowgli stories are excellent, all the same, although they feel somewhat dated, maybe because I’m not familiar with the setting.

Overall, I felt that The Jungle Book(s) by Rudyard Kipling contained somewhat mediocre and dated stories, especially in comparison to his later writing. Kipling’s writing improved in Just So Stories. While I’ll read those stories again and I may revisit select jungle stories, I can’t imagine reading all of The Jungle Book or The Second Jungle Book again.

But I’m not a ten-year-old boy. Maybe, in nine years, I’ll let my son be the real judge.

Have you or your children read Kipling’s jungle stories?

Have you reviewed The Jungle Book or The Second Jungle Book? Leave a link in the comments and I’ll add it here.

I am in New Zealand for nine days, so I may not be visiting your sites or responding to your comments while I am gone, but I’ll make up for it when I return!