I did not like being a teenager. Particularly ages 13 through 17. I was awkward. I was easily embarrassed. I was unpopular (or so I thought). I was nerdy. I was shy. I felt powerless. I wanted to be someone, and I was stuck just being me.

I suppose that’s why I’ve always avoided reading Young Adult fiction: why would I want to relive those years in a novel? 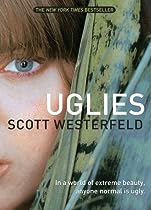 Because my goal for July was to go out of my comfort zone, I picked up the YA fantasy/science fiction novel Uglies by Scott Westerfeld despite my reservations. My goal this month has been to try something new in various genres. I’m glad I did: Uglies was very good. I can’t say I loved it, but I’m immensely glad I read it. I probably shouldn’t avoid the YA moniker as I have in the past.

Approaching teenage-hood from this angle was interesting because it felt true to life, even though I’ve since come to terms with “just being me.”

I appreciated, but didn’t love, the premise behind Uglies. In a futuristic dystopian society, Tally is a typical awkward girl, one of the Uglies, awaiting her sixteenth birthday so she can have the operation everyone gets: the operation that will make her Pretty. When her friend Shay claims she doesn’t want the operation, Tally’s world begins to be turned around. Is there really any life beyond those perfect pretty faces in New Pretty Town?

Just like teenagers have to do, Tally faces situations where she must decide: betrayal versus loyalty, friend versus foe, bravery versus the easy way out, what she wants versus what is right. These “decision” situations are what I liked most about the book. Westerfeld takes an out-of-this-world situation and puts down-to-earth choices that teens could relate to on a realistic level. What will Tally choose in the end?

I think Uglies was definitely written for a teenager to read. If I’d read it as the awkward teenager that I was, I think I would have related to Tally’s emotions and to the drama that comes from various interactions. As an adult, I found myself rolling my eyes just a little bit at the drama behind the decisions. Oh, the drama: it reminded me so clearly of being an awkward teenager.  I guess I’ve finally gotten over being a teenager because the drama wasn’t personally painful to recall.

I found the formulaic feel behind the developing plot to be reminiscent of a children’s novel because it was predictable. Yet, I wouldn’t have wanted it to be any different. Any other development or ending would have been disappointing or frustrating, I think. But to clarify, the novel as a whole wasn’t childish in any way. Rather, I think the issues themselves were true to teenage life.

This is my ignorance of the YA genre speaking, but maybe that’s what makes it YA: the issues and questions are advanced (and something that teenagers can relate to), but the basic structure captures the formulas already familiar to a teen reader.

What do you think makes a novel Young Adult rather than adult or children’s?  Does the genre label mean anything, or is it just marketing? I had previously thought it was a marketing label, but in this case, I think Uglies is distinctly for young adults rather than for adults or children.

In the end, I can say I really liked reading this book, and I’d recommend it to teens. It was a fast read, both as an “easy” read and in terms of plot. I just kept turning the pages, and I loved it for that fast pace. I am eager to read the next book so I know what happens, although I admit I’m a bit worried about the potential for the trilogy going sour. (I don’t think sequels ever live up to the original.)

If you have reviewed Uglies on your site, leave a link in the comments and I’ll add it here.