Simms Taback has an illustration style all his own. His children’s picture book illustrations are often a blend of watercolor, gouache (an opaque watercolor painting), pencil, ink, collage, and I even observed some crayon illustrations. His colors are bright and his books have subtle jokes in the illustrations (for the parents to find). So far, he has won the Caldecott Medal once (in 2000 for Joseph Had a Little Overcoat) and he was a Caldecott Honor once (for There Was an Old Lady Who Swallowed a Fly). 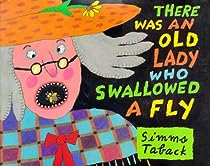 I received There Was an Old Lady Who Swallowed a Fly by Simms Taback at a baby shower, and I really enjoy the illustrations. They are bright and amusing. My son likes to put his hands through the die-cuts and look at his fingers on the other side (a practice I’m not keen on encouraging because that could lead to book damage!). All the same, I sing him the silly song as we read it.

In Joseph Had a Little Overcoat, Taback has again retold a folkloric song (this time a Yiddish song) with his blend-of-many-styles illustrations. Using die-cuts, he shows how Joseph’s little overcoat, when it is worn, becomes a vest, scarf, handkerchief, and a button. In the end, Joseph learns that even when he has nothing, he can still make something (in this case, a book!). Taback’s subtle commentary in the illustrations corners are incredibly amusing, and they play on the Yiddish tradition (for example, a newspaper headline says “Fiddler on Roof Falls Off Roof”). It’s definitely another winner. 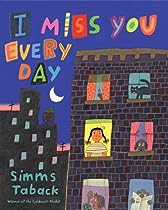 I Miss You Every Day is illustrated with child-like crayon, colored pencils, markers, and all types of kid-like charm. A lonely child mails herself to her grandparents, who live far away, because she misses them every day. (The loved ones are never named as grandparents in the story, only in the illustrations.) I feel a connection with this book simply because I think of how much my son will miss his grandparents who live far away. (Right now, of course, he’s still a bit clueless, which is all the sadder for me when I think of it.) I love the last page, when the little narrator says “Tuck me in and read a story.” The illustration shows her bed littered with some of my favorite children’s stories: The Snowy Day, The True Story of the Three Little Pigs, Goodnight Moon, and of course, Joseph Had a Little Overcoat. Simms Taback’s Big Book of Words is a large-sized almost board book. By that, I mean that it’s not a board book, but the pages are a little thicker and it almost acts like a board book. There are one or two words on a page with Taback’s classic illustrations, taking us through a child’s world of playthings, clothes, food, and animals. My son likes finding pictures of things he knows how to sign (he’s still not talking very much, but he is finally communicating through baby signs, sometimes).

Simms Taback also has a number of other board books and picture books with his classic artwork. I like the style: it’s unique, it’s recognizable, and it’s fun. Taback certainly has a humor of his own in his children’s books! Other books that Simms Taback has illustrated are listed here. (It appears that his official website, simmstaback.com, is not working.)

Do you and your children have a favorite Taback picture book?