Dinosaurs from Head to Tail by Stacey Roderick

The nonfiction picture book Dinosaurs from Head to Tail by Stacey Roderick and illustrated by Kwanchai Moriya (Kid Can Press, 2015) provides the young dinosaur fan with a guessing game. First, a two-page spread shows a zoomed-in view of a part of a dinosaur’s body, with a question for the reader to determine which dinosaur had a body part like that. The next page gives the answer, with a picture of the full dinosaur in its supposed habitat. The text then details what scientists know about the particular dinosaur and what the unique body part did to help that dinosaur.

This was a fun game for me! I am not a kid-dinosaur fan and I do not know much dinosaur trivia, so I learned a bit about some animals I thought I already knew about, and lots of facts (and suppositions from scientists) about those dinosaurs I had never heard of. As a parent that often has to read aloud, I was grateful for the pronunciation guides after each long dinosaur name. I have to say that the guessing game format was a lot of fun. My favorite page featured the Pteranodon because I felt clever to know the name of the animal, only to be surprised on the next page to learn that it is not actually a dinosaur!

The collage illustrations feature photographs underneath the textured animals. All the animals are bright and interesting, and it does not take much guessing to determine that kids that love dinosaurs will love this book! The bonus is that there is much to learn from it as well.

Note: I received a digital copy of Dinosaurs from Head to Tail from the publisher for review consideration. 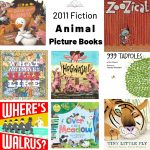