Why Read Moby-Dick? by Nathaniel Philbrick

I’ve been looking forward to rereading Herman Melville’s masterpiece, Moby-Dick, since I first read it about a decade ago. Alas, my book club meets in two weeks and I’m struggling to get time to read the marvelous epic!

Before I picked it up, I decided to read Nathaniel Philbrick’s small tribute to the novel, appropriately titled Why Read Moby-Dick? (published 2011, Viking). I loved reading of Phillbrick’s personal experience with the novel! Part literary criticism, part author biography, and part personal tribute to a favorite novel, Why Read Moby-Dick? certainly reinforced to my mind the many ways that Melville’s epic surpasses expectations and extends beyond its contemporary era into our own.

I enjoyed reading Philbrick’s manifesto as I began reading the novel myself. It was a reminder that the complexities of Moby Dick are best appreciated when encountered slowly.

A few examples of some concepts and quotes I loved from Philbrick:

The first wave of critics to appreciate Melville’s novel, which was not until after World War I, were impressed that Melville “conveyed the specifics of a past world even as he luxuriated in the flagrant and erratic impulses of his own creative process.” (page 7)

After quoting from the chapter on Nantucket (which ends with a tribute to the sperm whale), Philbrick writes:

And so it ends, this little sidebar of miraculous prose, one of many that Melville scatters like speed bumps throughout the book as he purposely slow the pace of his mighty novel to a magisterial crawl. (page 21)

There is an inevitable tendency to grow impatient with the novel, to want to rush and even skip over what may seem like yet another extraneous section and find out what, if anything, is going to happen next to Ahab and the Pequod. Indeed, as the plot is left to languish and entire groups of characters vanish without a trace, you might begin to think that the book is nothing more than a sloppy, self-indulgent jumble. But Melville is conveying the quirky artlessness of life through his ramshackle art. “Careful disorderliness,” Ishmael assures us, “is the true method.”

I’m about 25% finished with Melville’s novel. I’m entering the first of many treatises on cetaceans. While I know I must read a bit faster to finish in time for my book club, I’m still really hoping I can enjoy the methodical crawl Melville so carefully created in his tome — and I certainly am enjoying, once again, the parallels to today that Philbrick so wonderfully illuminated.

While I don’t think Philbrick is going to convince anyone that is decidedly against Moby-Dick, he may encourage the intimated reader to give it a try. And he certainly got me, an interested reader who enjoyed the book a decade ago, very excited to revisit it. 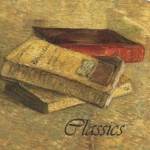 Tender is the Night by F. Scott Fitzgerald

So We Read On: How the Great Gatsby Came to Be by Maureen Corrigan