Lord of the Flies by William Golding

Often, I consider superior writing to be more important than a superior story: if it is written well, I don’t care so much about the story because the powerful writing can carry my interest in the book. 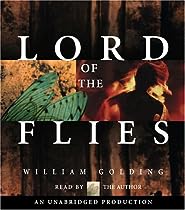 Lord of the Flies by William Golding, however, failed that test. I loved the writing: Golding’s prose is magical as he describes the tropical island. All description is incredibly powerful, and his writing and characters are strong throughout the novel. Golding was awarded the Nobel Prize in Literature in 1983 and I believe that is probably well deserved. But in the beginning, the middle, and the end of Lord of the Flies, I hated the story. To be honest, I had a queasy feeling in my stomach as I listened to the audiobook, and I listened to the last two-thirds with absolute horror.

In Lord of the Flies, Golding creates a nightmare: dozens (probably about 50) young boys, aged 6 to 12 years old, land unharmed on a deserted tropical island after their plane, which was taking them to an English boarding school, crashed. No adults survive the crash, and since a world war is going on, there is little hope of rescue: no adults know where the boys are.

At first, the boys delight in the adult-free world. The lagoon is tempting and the acres of fruit trees are refreshing. Ralph is elected “chief” and the group of “biguns” cares for the “littluns.” Ralph directs the group in building shelters and keeping a signal fire in hopes that a boat can rescue them. His key helpers are Jack, who leads a group of boys in hunting the wild pigs on the island, and Piggy, an overweight boy with plenty of brains but little respect from the others. Ultimately, however, Jack and others determine that hunting the wild pigs is more fun than staying, night and day, by a fire pit. The group becomes violently divided as sanity disappears in chaos.

As a mother, I was disgusted from the beginning as I considered so many very young boys stranded on an island, especially the very young boys. Whenever a “littlun” spoke, I thought of my seven-year-old nephew, who (I think) still cries when he falls and skins his knee. I thought of the nightmares such young children would have being on a deserted island for weeks and months at a time. Then I thought about how immature 12-year-olds really are. What do they know about leadership? Diet? Sanitation? The ideas abhorred me. When the boys began acting like “savages” during the hunt for the pig, I was all the more disgusted.

William Golding, who narrated the audiobook, spoke at the end of the narration about what the book is about. He said he thinks it’s ultimately about law: what happens to society without law? (Of course, he then says that no one can tell you what a book is about; you must determine for yourself.)

I personally think Lord of the Flies is also about human nature: what are our true desires, and what do we do if no one is watching us? I think that is why classes read it in school. I decided to read Lord of the Flies now simply because I had never read it: when others in my high school read Golding’s classic, I was in the advanced English class, which read To Kill a Mockingbird (thoughts here).

In a sense, both classics are about similar things: human nature. But there are significant differences. To Kill a Mockingbird is grounded in the 1940s south, where children are learning that diverse people still are people and that one should treat others like they would like to be treated. Scout changes from innocent to slightly less innocent through the course of the book as she loves those around her, despite their race and socioeconomic class. Lord of the Flies, on the other hand, shows that a lack of society (i.e., rules) can turn people, even young children, into savages and murderers simply because that is our base nature as humans. Ralph learned violently what it means to grow up.

I much prefer the more positive and realistic look at a child’s growth.

I understand why Lord of the Flies has a place on the classic lists: it is a beautifully written book that shows an important side to humanity, albeit a disturbing one. There is plenty of symbolism that hints to this depressing side of human nature. But I don’t think Lord of the Flies should be studied in schools. It is disturbing in an unnecessary way, and I shudder to think of a teenager discussing it in a class setting. It is simple enough that one can understand it without a class setting, and there are so many better stories out there for students to study.

In searching for other reviews (linked to below), I’m finding that most people who review this book absolutely loved it, whether as a teen or as an adult. I am seriously amazed. I couldn’t stand the story, and I would hate to have read it in a class setting, let alone discuss it in a class. The symbolism seems pretty obvious and the negative portrayal of human nature seems pretty, well, depressing. Why study it in a class? Yuck!

But I’m apparently in the minority.

If you have read Lord of the Flies on your site, please leave a link in the comments and I’ll add it here.