When I first began book blogging, I told myself I wouldn’t join challenges because I’m just reading and blogging for myself. But I have given in. The appeal of reading challenges is that it helps me get organized in my reading. Besides, they are fun to plan. Most of my challenges are personal, ongoing challenges without a time limit. (I posted about those yesterday.) The ones below are blogging community challenges.

I’m realizing that, as my son’s napping schedule changes (read: decreases) in the coming year, my reading (and blogging) time will be decreasing. In time, I may have to completely rework these goals to be more realistic! For now, these are my preliminary goals.

I realize this post is very, very long. Read any or all that may interest you. I also wanted to wait until I knew which challenges I was joining before posting my “reading lists.” I’m glad I did, because I’ve been changing these around for weeks!

Any books to read listed below are just preliminary ideas: I may change my mind at any time. I probably will.

(Links are to challenge sites where available.)

World Citizen Challenge (nonfiction). This is the most intimidating challenge for me, because the books in each category can’t be about my home country, and I know virtually nothing about international affairs. For the world issues and anthropology categories, I plan on focusing on third-world poverty/hunger. I’ll do the Postgraduate level for this “class,” for which I need to read seven books from the six categories. Why such a hard level for this challenge? I took a “foreign policy” class in college and slept through it every morning (it was at 9 a.m.); I should actually learn something! Here is my pool of books I want to/should read. (I hope they all fit the categories and aren’t about the USA or anything!)

The Science Book Challenge (nonfiction). I have dozens of books about the cosmos, DNA, genetics, and evolution on my “to be read” list. I plan to read at least three of them this year. Just a few on my list: DNA by James Watson, Cosmos by Carl Sagan, Napoleon’s Buttons by by Penny Le Couteur and Jay Burreson, Proust Was a Neuroscientist by Jonah Lehrer, The Ancestor’s Tale by Richard Dawkins, God’s Equation by Amir Azcel, and A Brief History of Time by Stephen Hawking.

BiblioShakespeare Challenge (fiction and nonfiction). The challenge is read six books by or about the Bard. I plan on reading his sonnets, The Art of Shakespeare’s Sonnets by Helen Vedler, and Will in the World (a biography) by Stephen Greenblatt, as well as three plays.

Dewey’s Books Challenge (fiction and nonfiction). I plan on reading five books that Dewey reviewed on her site. Some on my list after a leisurely visit to The Hidden Side of a Leaf: 1984 by George Orwell;  The Book That Changed My Life by R. Coady and J. Johannessen; The Grapes of Wrath by John Steinbeck; Proust Was a Neuroscientist by Jonah Lehrer; Half of a Yellow Sun by Chimamanda Adichie; The Absolutely True Diary of a Part-Time Indian by Sherman Alexie; A Caldecott Celebration: Seven Artists and Their Paths to the Caldecott Medal by Leonard S. Marcus; The Penelopiad by Margaret Atwood; Ethan Frome by Edith Wharton; and Fun Home: A Family Tragicomic by Alison Bechdel.

Dewey Decimal Reading Challenge (nonfiction). I have so much nonfiction on my “to be read” lists and I kind of was hoping there was a general nonfiction challenge (but I wasn’t quite ready to start one myself!). I’m glad I found this challenge.

9 for 09. This is a very random challenge. I can’t figure out why I’m going to join other than it’s fun looking at my shelf trying to figure out which book fits which category. I’m going to have fun placing the books I read (that I own) into each of the following categories throughout the year:

Really Old Classics Challenge. This is my own challenge and it ends July 31, 2009. You can still join at any time: you choose how many books you want to read and you read them and review them on your site. That’s it. I want to emphasize that you can read just one book and still participate in this challenge. I’ve chosen to read five books; I’ve already read two. I plan on reading The Odyssey and The Aeneid, probably the Fagles translations on both accounts. I also want to read a few more translations of each of those and of The Iliad, and I plan on reading Aristotle’s Ethics (as part of the Dewey Decimal Challenge) as well.

Martel-Harper Challenge. Dewey started this quarterly challenge in October, and I’m going to continue hosting it in her honor. I’m doing this challenge because I love how varied the list is. For first quarter 2009, I plan on reading Animal Farm and Borges Fictions, which I’m already in the middle of and which Martel most recently sent Harper! 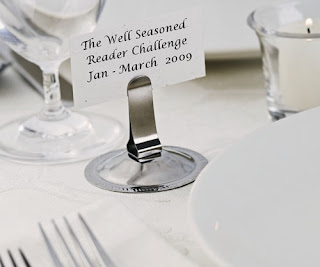 The Well-Seasoned Reader Challenge. This challenge goes from January until the end of March 2009 and asks us to read books about eating, travel, or cooking. On my list: The Art of Eating by M.F.K. Fischer, which is a collection of all of her essays about eating; The Flavor Bible, which I won from Bermuda Onion last month; Culinary Artistry; On Food and Cooking (a reference book); The Elements of Taste; An Edge in the Kitchen; and The Art of Simple Food by Alice Waters and The Improvisational Cook by Sally Schneider (Christmas presents from my husband).

Which challenges are you joining, if any, for 2009?