Almost from its original publication in 1719, Daniel Defoe’s Robinson Crusoe had an immense impact on literature for children and adults. It has been widely seen as one of the first major novels in English; as the stimulus for a range of adventure stories; as the kernel for abridgments and adaptations; and as the marker for particular personal and political experience. (page 129)

I can believe that. I liked Robinson Crusoe’s themes (reviewed here), and I can see how people through history could pick and choose various themes to expand upon both in criticism and when creating adaptations.

For the sake of this month’s project, I decided to look at some of the modern-day abridgments and adaptations of Robinson Crusoe to determine how it is still viewed. In Lerer’s analysis of some of the adaptations from the 1800s, he observers that many of the themes of Robinson Crusoe are taken away in making it an adventure story, and each rewritten version focused on a different moral lesson. The main difference among all the early retellings was the tone (page 137).

I came to this project torn as to whether abridgments for children are good. I wished that I could determined that adapters are more faithful to the original in this day and age, but I also wished I could suggest that everyone just stay with the original,  simply because I like classics to be left alone.

In the end, I’d suggest that there are similar changes in tone in the various children’s adaptations of Robinson Crusoe today, and some of them eliminate or completely rewrite the major themes of Robinson Crusoe. But this is not always bad.

The Original versus Adaptations

The original Robinson Crusoe was not just about his adventure marooned on an island; it had some beginning stories, starting with how Crusoe was kidnapped by pirates, sold into slavery, escaped, and then began a plantation in Brazil, and it also had further story after he was rescued from his island. The original contains recognition that the savages are cannibals, since Crusoe finds human remains. Do you think the cannibal theme is appropriate for children? At what age can they deal with that theme?

But for me, Robinson Crusoe was not simply an adventure story: it was a spiritual journey as Crusoe came to peace with God. It also had strong themes of loneliness, fear, and survival. Emotion carried the story, for, with no other characters, Robinson Crusoe’s emotions had to be supreme.

One of my favorite aspects of the story was Crusoe’s religious transformation, so I worry about how much of that might be eliminated in adaptations for children.

The question is, then, which parts do abridgments excise from the story? Are they faithful to the spirit of Robinson Crusoe? Why are challenging words considered bad for children to read?

After reviewing a number of adaptations, I’d have to say that adaptations do have a place. They are much easier to approach than Defoe’s daunting novel, and they may introduce children to important themes.

I think the afterward to the Classics Starts edition did a good job of explaining why adaptations might be okay:

Even for a gifted young reader, getting through long chapters with dense language can easily become overwhelming and can obscure the richness of the story and its characters. Reading an abridged, newly crafter version of a classic novel can be the gentle introduction a child needs to explore the characters and story line without the frustration of difficult vocabulary and complex themes.

Reading an abridged version of a classic novel gives the young reader a sense of independence and the satisfaction of finishing a “grown-up” book. … (Classic Starts edition, page 149)

The modern-day language retellings won’t help a young child prepare to read Defoe’s language, and I hesitate to suggest that reading them (including the Classic Starts version) is reading a classic “grown-up” book; it’s reading a classic story, not a classic novel. The characters and themes are not the same as those in the original classic.  Even themes are changed to fit the adapter’s moral agenda. But there is a purpose behind these abridgments. Introducing a story to a young child may be a worthwhile endeavor, and the larger themes (as interpreted by the adapter) can be understood.

As I said, I came to this project torn as to whether abridgments are good or bad. I still think it really depends; one must read each abridgment to determine if it does a good or bad job at capturing the spirit of the original classic.

My biggest pet peeve is that most abridgments are not clearly marked as such: the Puffin Classics abridgment, which cuts out a lot of the themes, retains most of Defoe’s words, and simplifies the language, mentions an abridger in the very small print on the copyright page and on the back cover. It would be easy to miss. Therefore, if you are buying a classic for your child, read the copyright page to determine if it is an abridgment. Even if you think it’s the “real thing,” it may still be an abridgment or adaptation of the original.

The original and the adaptations that I read or skimmed are as follows:

In my subjective opinion, some of these remain faithful to the spirit of Robinson Crusoe and some don’t. 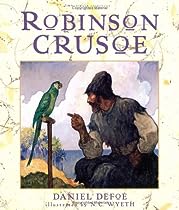 My favorite abridgment by is the Scribner Storybook Classic, which is a short 52 pages of what is mostly Defoe’s writing. It is beautiful for perusing, but faithful in theme and language to Crusoe’s original. I love the beautiful paintings: they evoke the beauty of solitude in nature, as well as the adventure quality of Crusoe trying to fend for himself and the spiritual development that comes from his struggle. It is a beautiful book for children to be introduced to the story, and I highly recommend it to child and adult alike. I just need to find a copy of it for my personal library!

The abridgment by Robin Waterfield is the most complete abridgment, cutting out repetition and some of the religious themes but keeping the language of Defoe. To be honest, I like the fact that some irrelevant details are excised. I didn’t read (just flipped through it and skimmed portions) but in the end (and much as I hate to say it), I would suggest this to a reader wanting to learn the story and experience Defoe’s language but daunted by classic literature. We want teens to want to read the classics. This is as close as you can get without being the real thing. 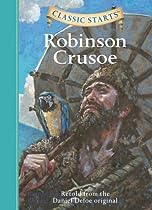 Despite my dislike of the generic, modern writing, I really enjoyed the Classic Starts adapted version of the story. I loved the discussion questions at the end; this added some degree of scholarship, even though the stark change in language took some scholarship away from the classic. This is not a classic novel; it’s the classic story. Its main moral theme was that Crusoe regretted disobeying his father. Crusoe’s story is completely retold and rewritten, using modern colloquialisms (“that’s for sure”) and lots of exclamation points. And yet, it is so readable, I found myself reading the entire thing. It does have serious typos throughout.

As I mentioned, I reviewed a lot of adaptations this week. For more detailed analysis and for quotes for each of them, visit this page for my detailed summary. (It was so long, I didn’t want to post it on the main page!)

What are your experiences with adaptations? Have you had a bad experience? I read a bad adaptation on Little Woman when I was twelve years old; I always afterward thought I’d read it but of course I hadn’t really.

Have you had a good experience reading an adaptation and then reading the original? I’m curious if these adaptations do help one prepare for true classic novels.