The Victorian Art of Fiction: Nineteenth-Century Essays on the Novel, edited by Rohan Maitzen

I loved to read The Victorian Art of Fiction: Nineteenth-Century Essays on the Novel because what could be better than essays by Victorians about Victorian novels?!1 I really enjoyed the essays I read, but I should begin this post by clarifying that unfortunately, my Interlibrary Loan expired before I finished the book. I only got through about 8 of the 22 essays in Rohan Maitzen’s collection. I barely touched the surface and didn’t have time to read deeply.

Nevertheless, in a few years, when I’ve (hopefully) read a greater amount of Victorian literature, I’ll have to revisit the collection. I think having actually read the major novels they are talking about would make it even more enjoyable!

I first heard of this collection on Wuthering Expectations. Although the idea of Victorian essays about Victorian novels was an attractive one, what worried me was that I haven’t read enough Victorian literature to understand the essays. Amateur Reader’s response to that worry was this:

One thing to remember about Maitzen’s anthology – the essays are written by actual Victorians, so they haven’t read most of the classic Victorian novels, either, particularly the ones published after they are writing. And they have read mountains of books no one reads any more. So it all sort of averages out.

I think he expressed it perfectly. I have only read, probably, a dozen Victorian novels in my life. But it did not, for the most part, matter as I read the essays. In their essays, the Victorians were quoting the contemporary literature and the major contributions in the 1700s (of which I have read nothing, expect for Robinson Crusoe). But their essays revolved around issues: What is the purpose of a novel? Do these novels have morals, and should they? How do these novels reflect our society? None of the essayists question in so many words, but that is what I got out of their essays.

I don’t have lots of deep things to say about the essays I read. I think I’ll have to leave the analysis to the student at the University of Chicago who has requested this copy of the book and therefore cut my time with it short. I’m just an inexperienced beginning reader of Victorian lit who found this collection of essays by chance (thanks to the blogosphere). I really liked them. As I read an essay, I would think, “Oh, now this is the one I like best!” and then I’d begin the next essay and feel the same way.

One great example was George Eliot’s essay on “Silly Novels by Lady Novelists” (written 1856). This essay is about the novels that have, shall we say, not endured the test of time. This essay, then, was somewhat similar to an essay by Margaret Atwood or maybe Toni Morrison writing about the qualities (or lack thereof) of Harlequin Romances (although, it should be noted, that the silly novels in question all had an underlying religious message, so therefore were not like a modern romance novel in any way). The quotes Eliot shared from these “silly novels” were outrageous to me and I enjoyed laughing. The fact is that no, I do not want to read all types of Victorian fiction. I just want to read the well-written, well-developed Victorian fiction, that which has withstood the test of time and remains somewhat pertinent today.

Some thoughts from George Eliot on the subject:

To judge from their writings, there are certain ladies who think that an amazing ignorance, both of science and of life, is the best possible qualification for forming an opinion on the knottiest moral and speculative questions. (page 134)

Every art which has its absolute technique is, to a certain extent, guarded from the intrusions of mere lef-handed imbecility. But in novel-writing there are no barriers for incapacity to stumble against, no external criteria to prevent a writer from mistaking foolish facility for mastery. … [I commend this] at parting, to the consideration of any feminine reader who is in danger of adding to the number of “silly novels by lady novelists.” (page 144)

I also was quite intrigued by Margaret Oliphant’s essay “Modern Novelists – Great and Small” (written in 1855) and now I want to try one of her novels! I also liked the essay “Sensation Novels” by Henry Mansel (1863) simply because I’ve enjoyed the Wilkie Collins sensation novels I’ve read. These novels are mostly ridiculous in their plots, I know, and that was the fun thing about the essay because I could see all some of his criticisms and yet I didn’t care. On the other hand, he seemed to keep coming back to the bad moral lessons found in them. From my sensation novel experience, I have found that the bad guys seemed to lose in the end, but maybe I haven’t found the really “immoral” ones yet, he he he.2

In fact, many of the essays seemed to worry about the bad messages in the novels, something that doesn’t surprise me about Victorian literary criticism.

Although the aim of all fictitious literature is primarily to interest the reader … it would yet seem as if recently the determination to achieve that special kind of interest which consists in mere amusement, had prevailed too largely among our writers of tales and novels.  (David Masson, “Thackeray and Dickens,” 1851; page 43)

“We cannot conceal our estimate of the importance of this department of literature as medium for the diffusion, or at least the maintenance, of sound and healthy views of moral and religious responsibility.” (C.W. Russell, Novel-Morality: The Novels of 1853; page 102)

And to my surprise, even an old favorite of mine, Jane Eyre, was called in to question:

To say that Jane Eyre is positively immoral or anti-Christian, would be to do its writer an injustice. Still it wears a questionable aspect. … Let [the author of Jane Eyre] take care that while she detects and exposes humbug in other minds, she does not suffer it to gain dominion in her own. … Let her be a little more trustful of the reality of human goodness, and a little less anxious to detect its alloy of evil.” (Anonymous, Review of Jane Eyre, 1848; page 26)

Maybe because I mostly read the first essays in the collection (they were in publication order) or maybe because it’s one of the major novels I have actually read. At any rate, I felt I read a lot about Jane Eyre.3 It seemed to come up in most essays in one way or another. Obviously, it was an influential novel from that day. Since I love it so much, I especially appreciated Margaret Oliphant’s tribute to Charlotte Bronte.

No one in her time has grasped with such extraordinary force the scenes and circumstances through which her story moved; no one has thrown as strong an individual life into place and locality. Her passionate and fearless nature, her wild, warm heart, are transfused into the magic world she has created – a world which no one can enter without yielding to the irresistible fascination of her personal influence. Perhaps no other writer of her time has impressed her mark so clearly on contemporary literature, or drawn so many followers into her own peculiar path; and she leaves no one behind worthy to take the preeminent and leading place of the author of Jane Eyre. (Margaret Oliphant, Modern Novelists – Great and Small, 1855; page 120)

And with that, I’ll leave The Victorian Art of Fiction for now. I barely touched the surface of the essay collection, and each essay deserves its own lengthy response. I particularly miss the articles just about Dickens and Trollope essay about novel-reading. I wonder what other little gems I’m missing?

Maybe after I’ve read more Dickens (I’ve only read 3novels), Eliot (I’ve only read one), Trollope (none), the Brontes (one), the big novels of the 1700s (gulp), and … when will this list end? …, then I’ll return to the contemporary criticism of the era. For someone who likes criticism like me, I suspect it will be a nice reunion. 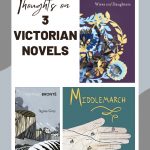 Women in Victorian England: Thoughts on a Few Novels by Victorian Women

The Life of Wilkie Collins (Biographies by Clarke and Peters)
Reviewed on July 9, 2010
Previous
Next