Most mornings, after my son (age 23 months) finishes his breakfast, he jumps out of his chair and runs to the kitchen stool, yelling, “Cook! Cook!” He climbs the stool and pounds the counter, a big smile on his face, for he knows I’ll probably give in and cook something with him. (I normally prepare a batch of breakfast granola twice a week, so I think that’s when this obsession started.)

I’ve been looking for something to nurture this interest, and then I recalled a book that months ago Eva mentioned her niece enjoyed: Pretend Soup by Mollie Katzen and Ann Henderson. 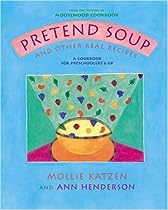 I didn’t realize how wonderful Pretend Soup was until I consulted another preschool cookbook and compared the two.

The second book had cooking activities, and each treat was either in a shape (such as fruit pudding decorated like a cat, bread shaped to look like a bear) or the treat itself was a sugary desert (chocolate dipped fruit, fruit tarts arranged in a pretty pattern). These recipes seemed far too artistic for my creative design talents, let alone those of my one-year-old (or even an older preschooler).

While Pretend Soup does include some “decorated” food (“Bagel Faces,” decorated with vegetables, for example), the emphasis in the entire book is different. Katzen and Henderson assert that for a preschooler, the fun part of cooking is the actual act of cooking. Watching my son, I believe it.

The introduction provides numerous safety ideas (such as mark the handle part of the bread knife with masking tape to remind the child where to hold it), as well as ideas to ease the stress of cooking with a child (such as keep a baking sheet under the mixing bowl, so clean ups will be as painless as putting the baking sheet in the sink). Cooking with children will certainly be messy, but that doesn’t mean it’s a no go.

Further, each recipe is written twice, once for the adult in words, and then illustrated in a two-page color spread so the child can “read” the recipe himself. My son is still too young for that aspect, but I’m sure three- and four-year-olds love being able to “read” along.

And then the “critics” (i.e., preschoolers) also provide hilarious reviews of the food they’ve created.

“I wish I could have two bunches of them!” says Nathan, liking his plate after the “Zucchini Moons”

“This is so good, I can’t even say a word.” says Matthew about the “French Toast”

“It tastes so good, I’m gonna eat it ALL UP!” says Jessica on the “Oatmeal Surprise”

What I like best about Pretend Soup is not the recipes; the end results seem mediocre and ordinary. My son and I have so far cooked the “Zucchini Moons” (sautéed zucchini with salt, pepper, and cheese), the “Hide and Seek Muffins” (with a hidden strawberry inside each one), and the “Pizza” (which he loved putting cheese on, and then some more). My son wouldn’t eat much of any of these, probably because he’s getting teeth this week and not eating much anyway. I didn’t think they were the most original or most delicious meals either.

No, what I like most about Pretend Soup are the tips and ideas for making the process fun. Cooking doesn’t have to be intimidating, and Pretend Soup makes even the most basic dishes into a game. I think the kids praised the end results (even the pretty ordinary sautéed vegetable dishes) because they had made it themselves. It was their creation: of course they liked it.

I have a friend that doesn’t let her son cook with her because “he wants to help me crack the eggs.” Apparently, she doesn’t want him to get that “hands on.” It’s messy, and eggs are, well, raw eggs.

Oh, my. How can I explain to you the look of absolute delight on my son’s face when he helped me crack open those eggs? That’s worth any mess. He had a blast: one minute the egg was hard, the next minute it was all runny. Enter: delighted screeches, loud laughter, and a largest smile I’ve ever seen. Plus, a mess on his hands and the counter, but hey, who cares?

Of the three recipes we made together from this book, I think my son had the most fun with the “Hide and Seek Muffins.” We had to roll the strawberry in sugar and dip it inside the muffin dough. My son would eat a strawberry, and then remember to get another and put it in the muffin dough. He also had fun putting the papers in the muffin tin, cracking the eggs, mixing the mix, and putting the dough in the papers. Yeah, pretty much all of it. He didn’t have patience to wait the 15 minutes for the muffins to be done: he said, “Eat! Eat!” as soon as he saw the strawberries. So we ate strawberries while we waited for the muffins. Altogether, it was a fun morning.

I look forward to many more mornings cooking with my son. It may not be recipes from Pretend Soup, but it will certainly be with my son!

Do you cook with your kids?

What are your favorite “kids cooking” recipes?

P.S. I know I’ve written three kid-like posts in a row; I’ll get back to other stuff the rest of the week, I promise!